Roaches, Silverfish, and Spiders—Oh, my! 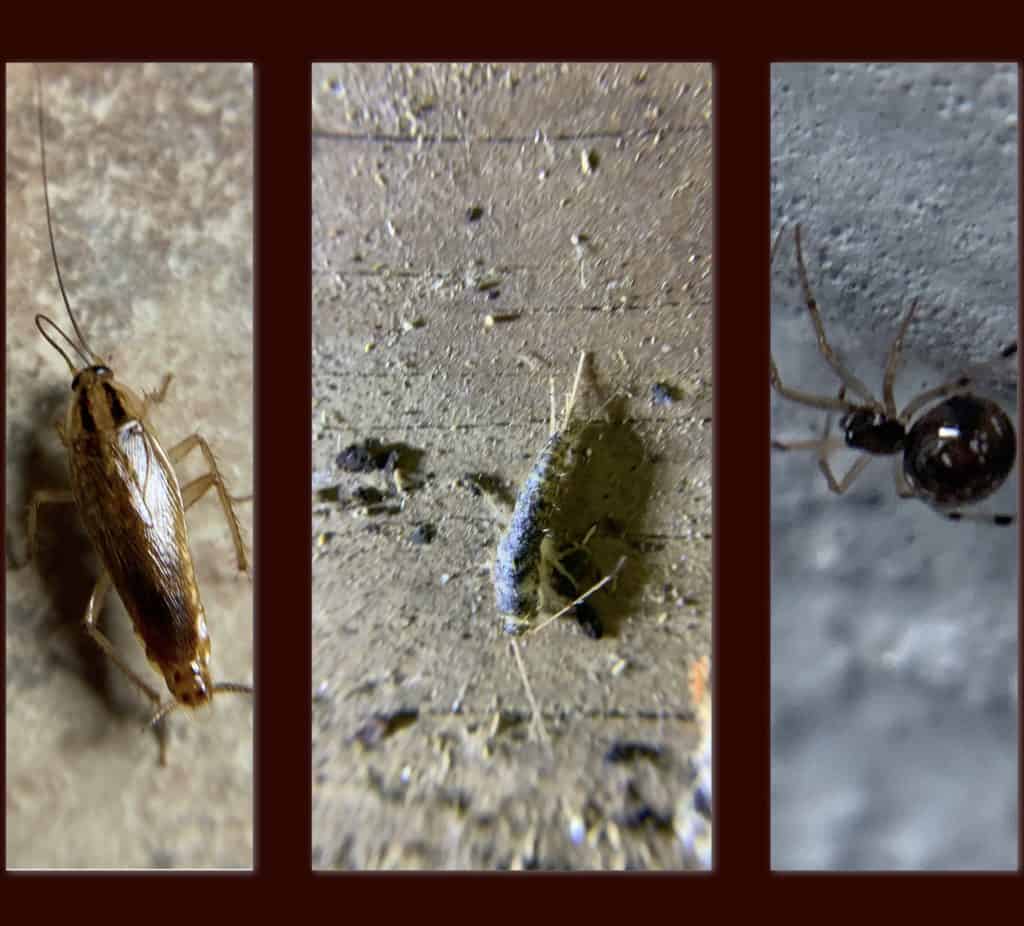 No other bug prompts more calls to pest control technicians than cockroaches. The very sight of them sends chills down your spine. We are repulsed by them and abhor their presence. 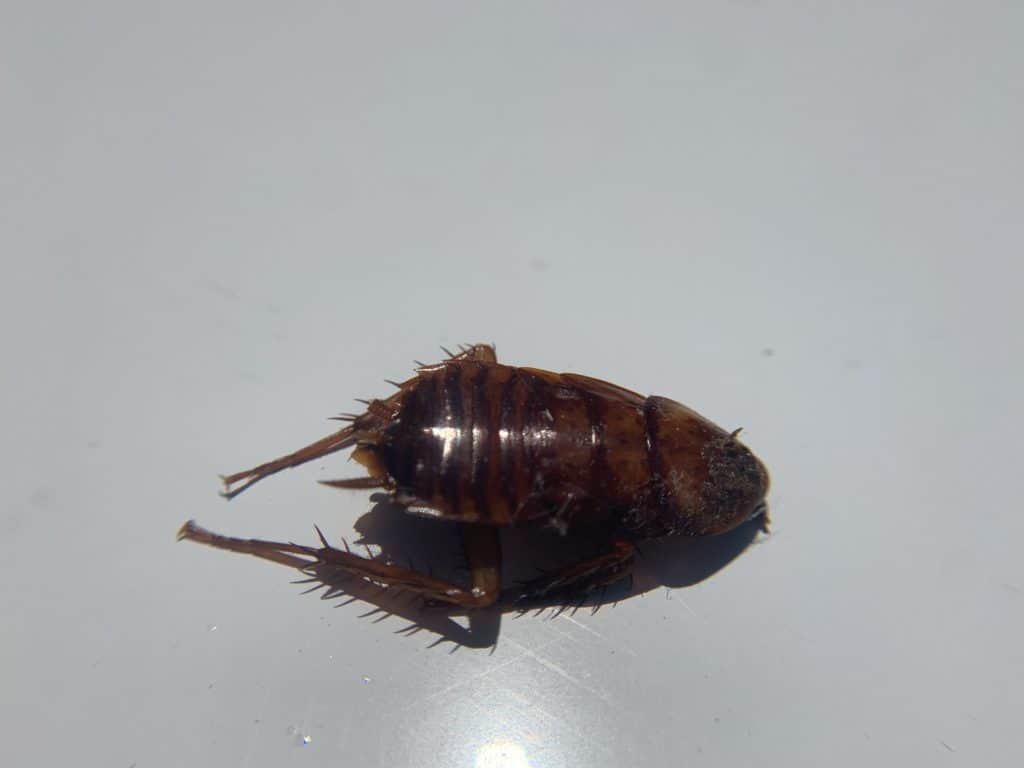 Can they fly? That is a good question, answered by some interesting facts.

While the American roach cannot fly in the true sense of the word, it can  glide from a high spot like a tree limb down to the ground. Sometimes you can be just minding your own business and accidentally step into the flight path of one of these gliding repugnant roaches which then lands on your head and gets tangled up in your hair—a nightmare scenario!

No matter what part of the country you live in, your home is not safe from cockroaches. They can effortlessly crawl through small openings or cracks and enter your home. 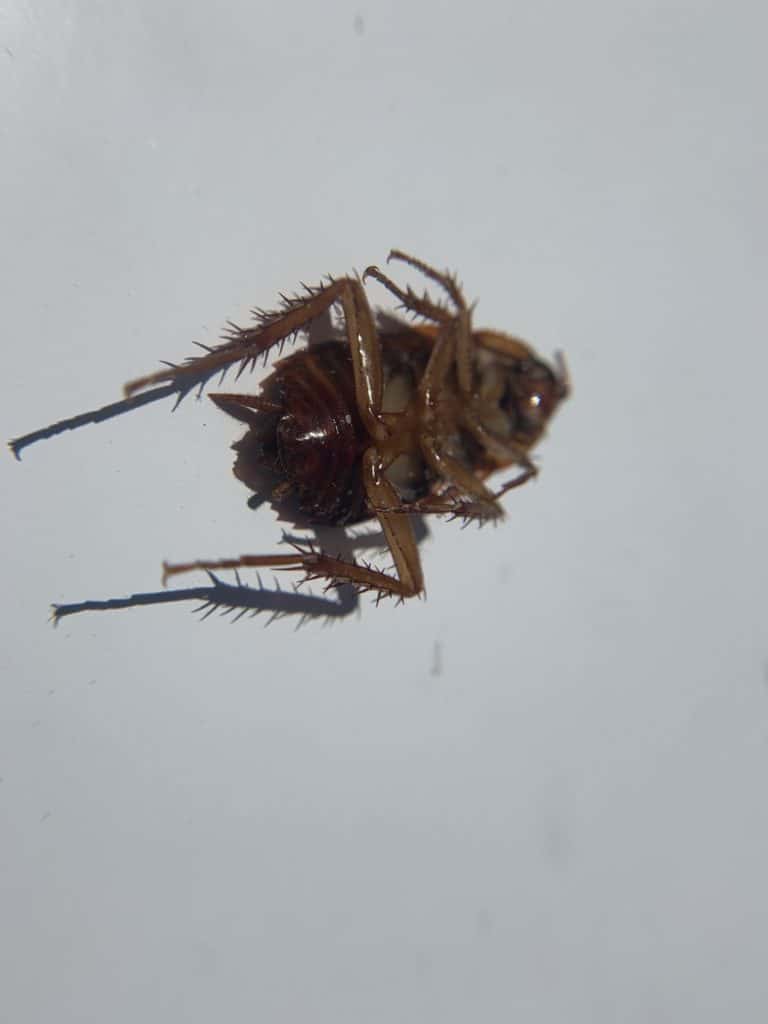 These little bugs have been pestering humans from time immemorial. Archeologists recently found an ancient cockroach preserved in amber. Initially, studies suggested the roach was over 200 million years old, but new evidence suggests roaches as a species are far older than previously thought. New theories state that cockroaches are over 350 million years old, dating back to when all the land masses on earth were joined together in what is called a supercontinent.

Roaches are survivors. They’ve survived the last five extinctions and will no doubt survive the next one.

There are over 4,500 different types of roaches in the world, but the good news is that only about 70 species live in the United States. Among these roaches are two groups: domestic roaches and non-domestic roaches.

American roaches, aka palmetto bugs, are large roaches that live outdoors. They thrive in warm, dark, and damp environments. Seeking moisture, they are often found in and around plumbing lines in bathrooms and kitchens. Refrigerators and dishwashers are common areas frequented by roaches. 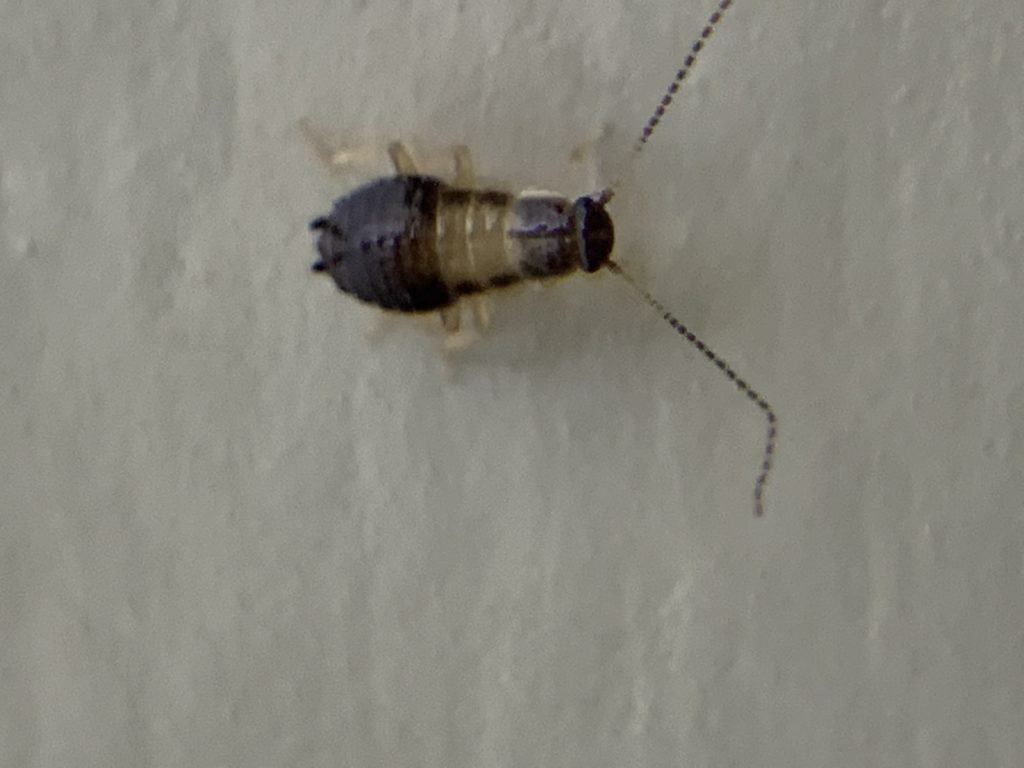 These roaches live and breed sharing living space with humans. German roaches do not live outdoors; they wouldn’t survive the colder winters found in the northern parts of our state. The fact that these roaches have been become domestic—living with humans—is a testament to their survival. No sane person would live with these most unwelcome guests. They are foul, sickening bugs, daily multiplying. Surely, we intelligent humans should be able to stop and kill such a small bug. Although they do not fly, they move quickly; but not so fast we can’t smash them with a shoe or our hand. 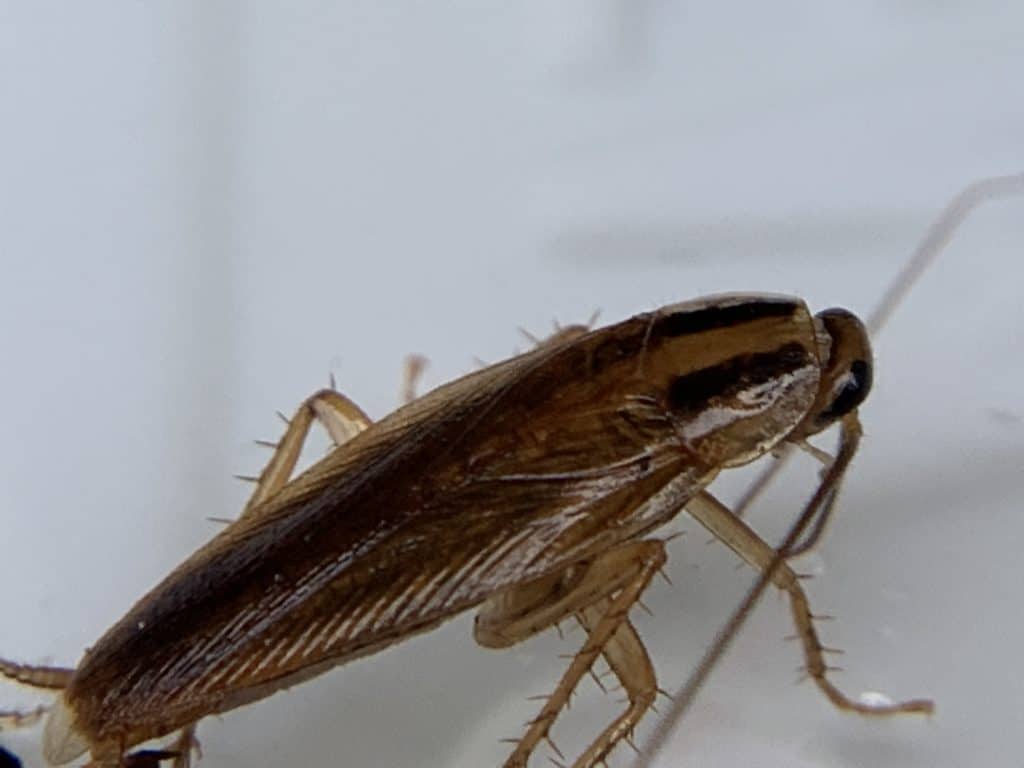 German roaches existed and have survived for thousands upon thousands of years living with humans because of their sheer numbers. They can multiply extremely fast. While human females give birth in about 9 months, a German roach gestation period is about 28 days. One egg can contain 35 or more nymphs.

Remarkably, these tiny roaches look nothing like they will after molting a few times. They are so miniscule, they can easily crawl into things we carry around like shoes, purses, bags, clothing, electronics, and many other things. 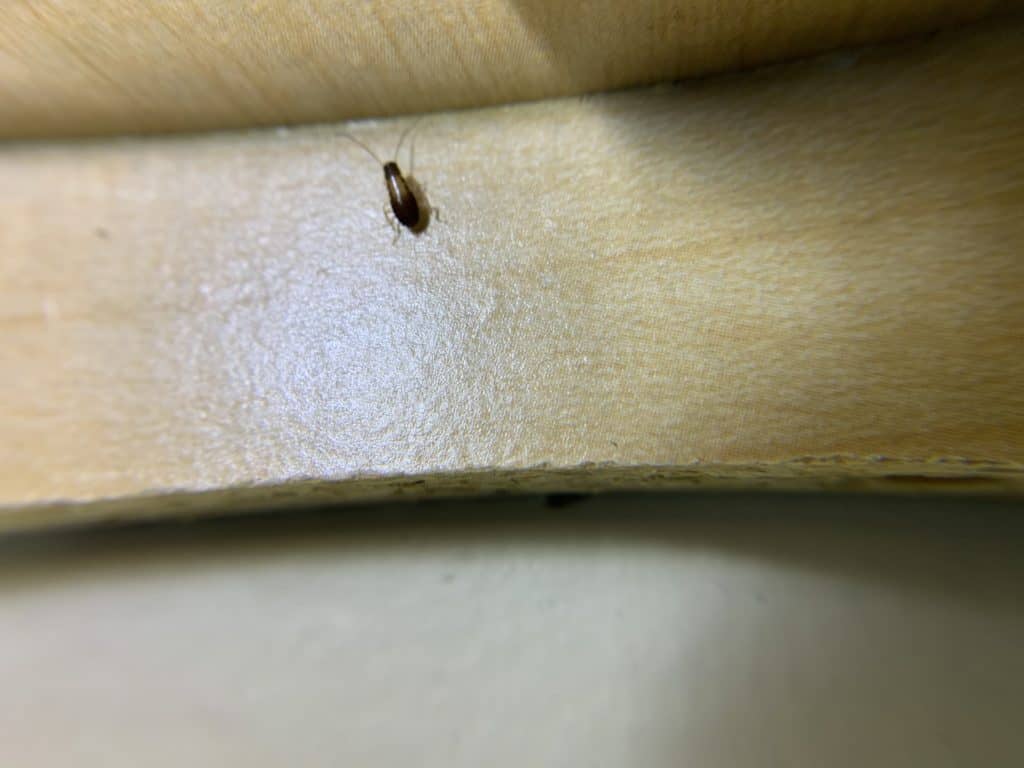 Finding just one German roach in your home is cause for alarm. Never think you just have one roach. While roaches will probably outlast humans for dominance on our planet, you don’t have to let them dominate your home. Call Dave’s Pest Control at first sight of a roach.

First, silverfish are not fish at all; they are bugs found throughout Volusia and Flagler Counties. They get their name from their silver color and because they move like a fish. They are closely related to another similar bug called a fire brat. Fire brats seek out warmth and often are found near a home’s furnace or stove.

Customers often see silverfish scurrying across the floor and wonder, “What is that? Where did it come from?” 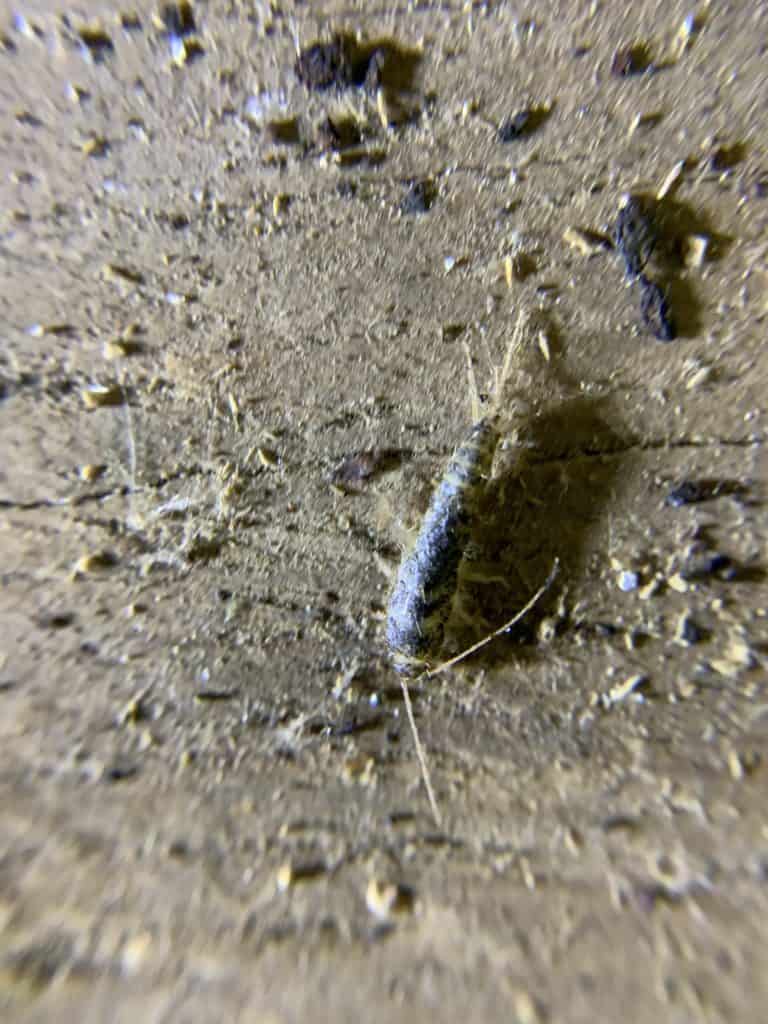 These small bugs do not eat other bugs; instead, they feed on paper, hair, clothes, books, magazines, and many other household items. Many people have found old pictures of deceased loved ones with holes chewed in them by silverfish.

They are frequently found in attics feeding on the paper backing of the home’s attic insulation. With a seemingly endless supply of food and a stable environment, attics are the perfect home for silverfish.

Silverfish can also be found in bathrooms and kitchens. They are attracted to moisture and will feed on mold created in high humidity environments. Sometimes they can get stuck in your bathtub or sink; silverfish cannot climb out of a tub or sink because the porcelain is too smooth for them to gain traction.

Silverfish are millions of years old. Their reproduction systems differ from most other insects. Instead of being born as one organism and metamorphosing into another, silverfish are born identical to the adult silverfish. Molting as they grow, they will get larger with each stage in their development. Silverfish can molt 30 or more times in one year and have scales which are different from most other insects.

Most true insects, through evolution, develop wings for flight, but not silverfish. They are still the same bug that they were millions of years ago. Insects that developed wings have a great advantage over other insects that cannot fly.

Bugs that fly can reach various kinds of food and keep clear of potential predators or danger. It is not known why some bugs evolved, gaining  wings, while others did not. It is theorized that some insects had to adapt to extreme climate changes while others were able to survive hiding under rocks, as silverfish did.

Many bugs have exoskeletons that are comparable to other mammals such as humans that have endoskeletons—internal skeletons. A bug’s exoskeleton is made of chitin. Chitin gives the exoskeleton strength and stability.

Exoskeletons protect a bug’s soft insides. It’s akin to having a suit of metal armor like the knights wore in medieval Europe. This hard protective shell is found on hundreds of organisms like ants, bees, roaches, and beetles, to name a few. Marine life such as lobsters, crabs, clams, and oysters also have exoskeletons.

Exoskeletons not only prevent damage and injuries to organisms, but also inhibits water loss. An insect’s muscles will also attach to their exoskeleton for locomotion. The exoskeletons of silverfish are covered in small hairs that can pick up insecticide dust easily.

Another remarkable trait is silverfish can live up to 300 days without feeding. They shirk from light and prefer to live under rocks or any other object that hides them from the light.

Silverfish have three long “antennas” on their rear end. Two of them are called cerci that are not antennas at all. Cerci are modified legs that have developed over millions of years of evolution. Many bugs have cerci like the cockroach which have two. They are used for discerning the world around them.

The third long antenna-like extension is used for balance, movement. and reproduction. It contains ovarioles which are part of their reproductive system. Many insects and bugs have this ancient type of ovaries used for reproduction.

Silverfish live in warm, humid environments. Finding a lot of silverfish could be an indication you have a moisture problem, perhaps a leaky pipe or condensation from cool air conditioning lines housed in a super-hot attic.

In New Smyrna Beach, we found a large subterranean termite colony in an attic. While treating for the termites, many silverfish were discovered living in the attic, practically side by side with the termites. We also found hundreds of spiders and other bugs taking advantage of the moisture in the attic. It was determined that the air conditioning was being vented into the attic. The mix of super-hot attic air and the cool air from the air conditioner created an ideal place for bugs to live, feed, and reproduce. 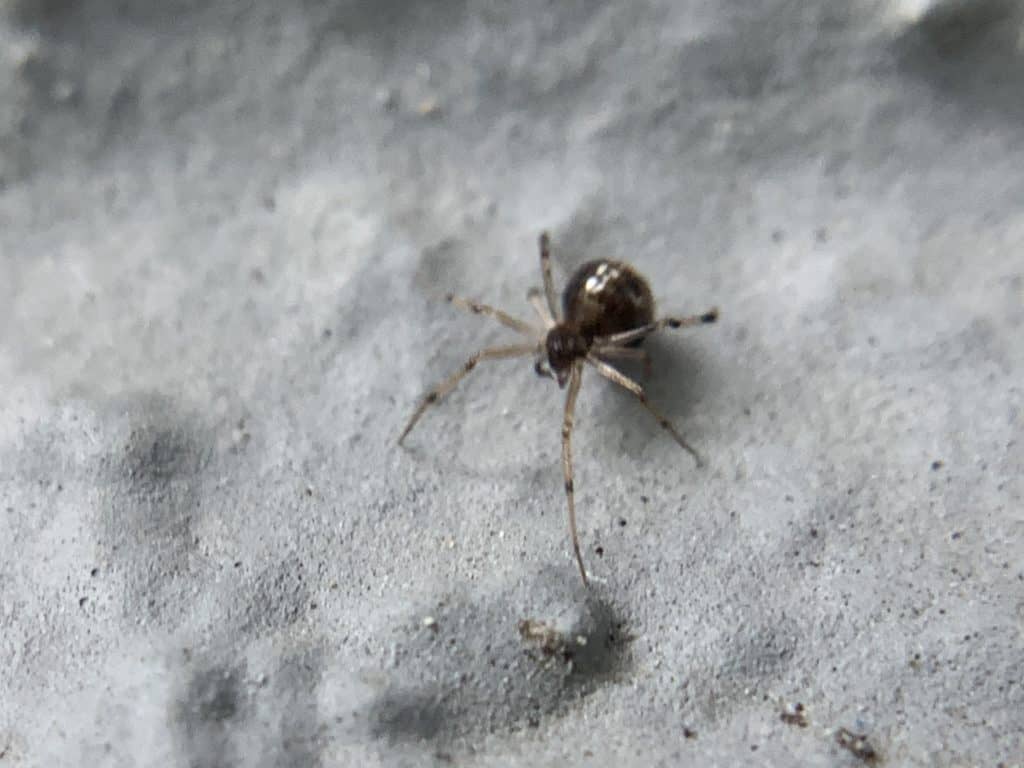 There are many kinds of spiders in Volusia and Flagler Counties. We often see those like the garden spider or the golden orb weaver. Then there are some spiders that are hard to find, and we hope never to see! 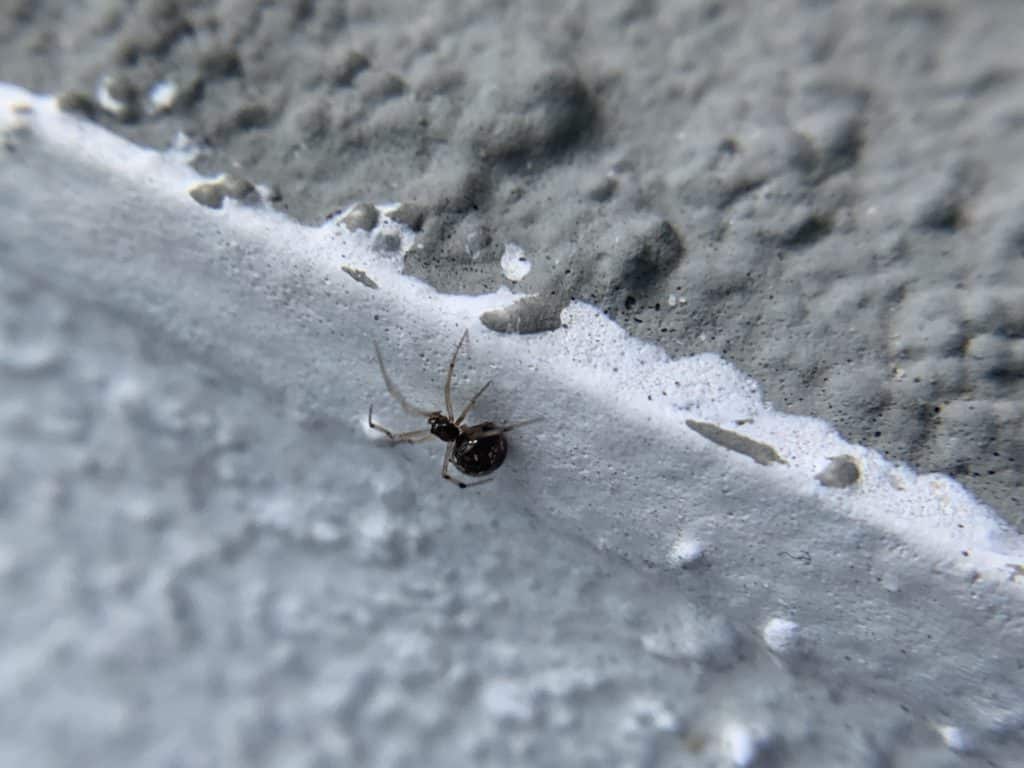 In our part of the world, venomous spiders are not as commonly found as non-venomous spiders. The common household spider only exists to catch bugs like mosquitos and do not pose a threat to the safety of humans. If one were to bite you, you would only suffer some mild irritation and swelling at the bite area.

False widow spiders are similar in shape to other widow spiders. They are brown in color with lighter markings on their large abdomens. The females are larger than the males and are found in dark places like under rocks or fallen trees.

Although they have a venomous bite, it is not a potent one. Usually, a bite from a false widow spider is like a sting from a wasp or bee.

The black widow spider and the brown widow spider are commonly found in our part of Florida. They are usually found in corners of homes and shy away from people. They only will bite if they feel threatened. This usually happens by accidentally pressing on the spider’s body. People have been bitten by a black widow spider that was hiding inside a shoe or in bed sheets.

Black widows are easily identified by their black bodies and distinctive red hourglass shape on their abdomen. They are small but can deliver a lot of venom. 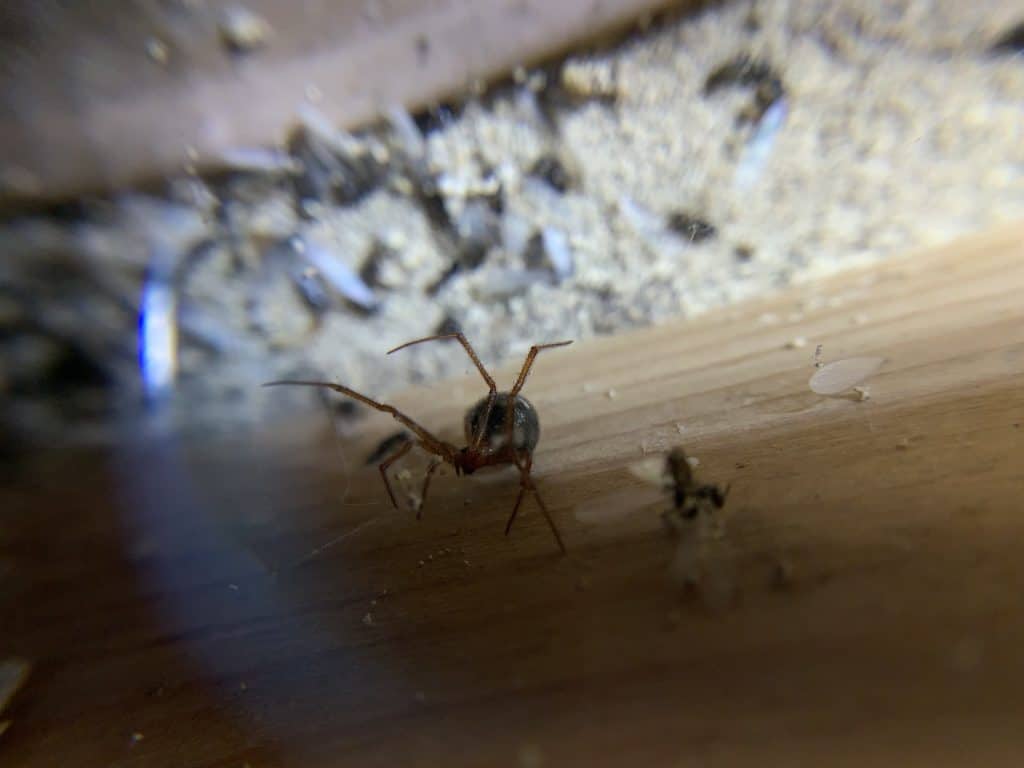 Regular pest control treatment to the outside of your home will greatly help reduce the presence of spiders and roaches. Additionally, interior treatments also work well at stopping roaches and spiders from getting very far. An attic dusting can last for years and is a great way to stop pesky silverfish from eating paper goods and cardboard boxes that you might store up there.