Invasive and Destructive Pests in your Landscape 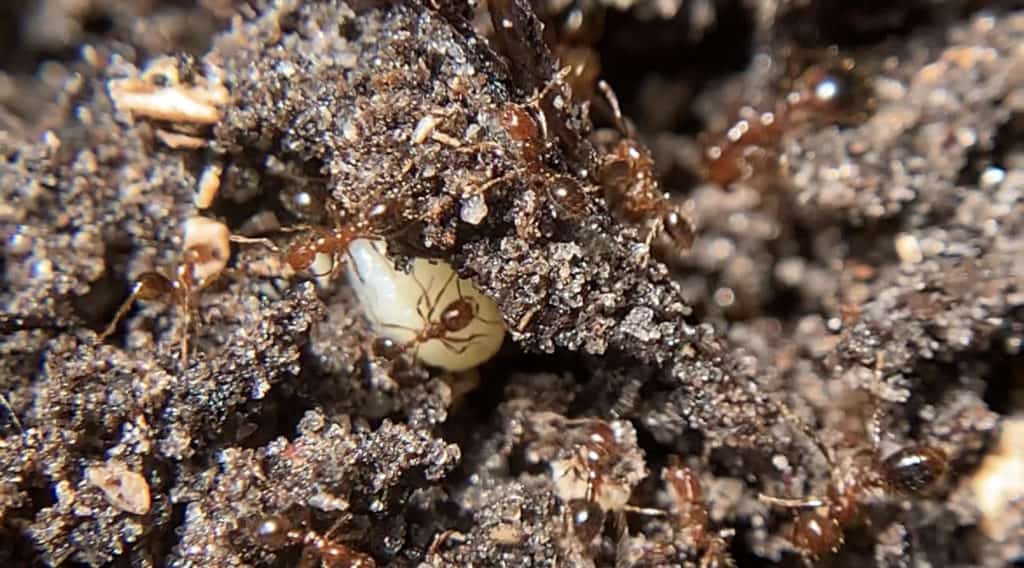 Anyone living in Florida knows what a fire ant mound looks like; but to the untrained eye, it may look like an ordinary pile of sand. None the wiser, you may walk right on top of it, setting off a flurry of angry fire ants moving at incredible speed for an unrelenting onslaught of stinging and biting all over your feet and legs and upwards.

A non-Floridian onlooker, seeing you smack your legs and shins while jumping around may think you’re a lunatic, but a savvy Florida native knows exactly what is happening.

While this scene may look hilarious, it is no joke to the one getting unmercifully bitten and stung all over. Fire ant colonies number not in the thousands, but the tens of thousands, all intent on biting and stinging. 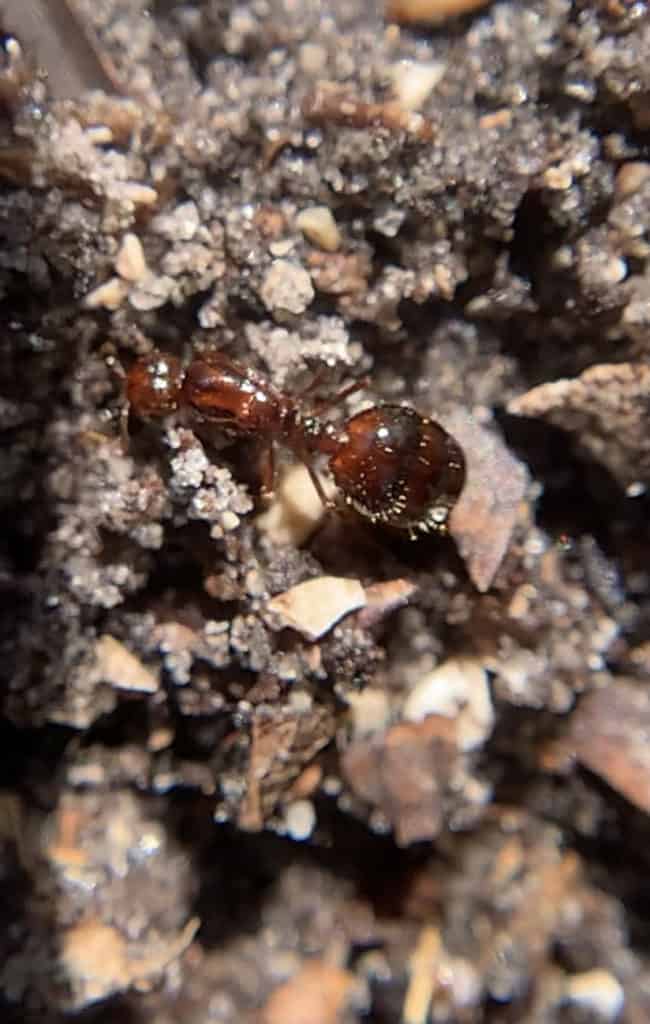 Fire ants both bite and sting, grabbing onto your skin with their pincers and bending their abdomen down to sting you. The hellfire-like venom they inject is called solenopsin and contains an alkaline venom which is 95% water insoluble. This toxic venom has cytotoxic, hemolytic, antibacterial, and insecticidal properties, which inflicts extreme pain at the sting sites that feels like you are on fire. Fire ants sting repeatedly, making an attack that much worse and widespread.

The alkaloids in the venom are responsible for producing the pimple-like postulates that erupt on the skin. The venom also has up to four major allergenic proteins causing intense itching and can cause an anaphylactic response. This has been observed in both animals and humans.

Fire ants are an invasive species accidentally brought into the United States from Brazil inside a cargo shipment some 80 years ago. Since then, these tiny ants have wreaked havoc, spreading across the southeastern United States.

Fire ants can enter your home through small cracks or openings. Unlike most ants, fire ants will eat just about anything. They are not picky when it comes to feeding themselves.

From the perspective of an ant, the world is not infinitely as large as we see it. For an ant, your life is all about survival and reproduction. Your world is nothing but a large colony of cloned replicas of yourself feeding and caring for the next generation of adults.

Like the fictitious characters “The Borg” featured on the television show Star Trek, fire ants have a collective mind and work as one. When faced with an obstacle like water, fire ants will cling together in a large mass and float until land is reached. Though some ants may fall off and drown, the sacrifice of a few to save the many applies here. 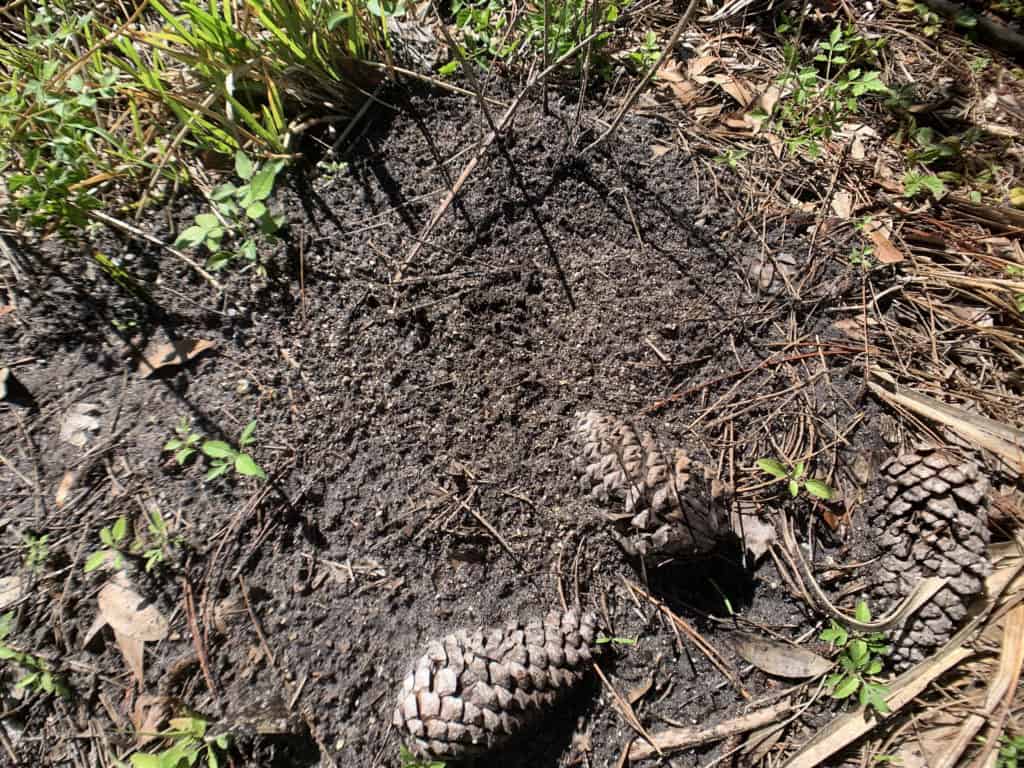 Fire ants make large dirt mounds, often in areas that get a lot of sunlight. The mound we see is just the tip of the proverbial iceberg. Beneath the surface is a dizzying maze of tunnels and chambers that make up the colony. The tunnels can stretch to 10 feet underground. This is why many homeowners who destroy a mound, later discover another one has popped up a few feet away. Some fire ant mounds can be so deep that the ants seem unstoppable as homeowners battle them every year.

Typical granular and powder pyrethrins may work on the surface, but ants tunnel down deep, escaping the poison, and start a new colony elsewhere.

In Volusia and Flagler Counties, fire ants are everywhere. In fact, there are more fire ants in Florida than people. Ants as a species outnumber humans by 1.5 million to one. In other words, for each human alive, there are over one million ants. In our coastal towns of Flagler Beach, Ormond Beach, and New Smyrna Beach, fire ants are literally everywhere. You can find them easily just by looking around for a few minutes in the woods. Nests are also commonly found next to the bases of trees.

Fire ants get their name from the painful bites they produce when their nest is disturbed. If a single ant bites you, you may feel a small amount of pain or discomfort, but if 1000 or more fire ants bite you at once, the pain will be much worse. 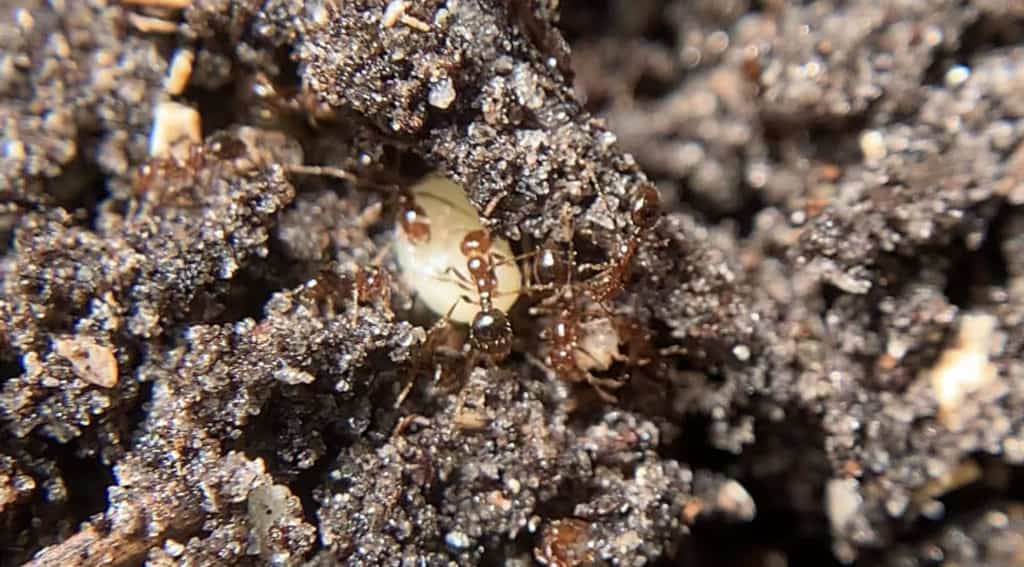 Getting bitten by fire ants is described as a burning pain. Red, swollen itchy bumps emerge from each bite. Secondary infections from scratching the bumps are also common. The swollen, itchy bumps can remain for 30 days or more. Scarring also is common and can last for many months or forever.

Although fire ants are not deadly, the sheer number of them is sufficient cause for terror. Getting stung by one bug hurts but getting stung by hundreds to thousands of angry ants would be the impetus for calling pest control and maybe a trip to the emergency room. 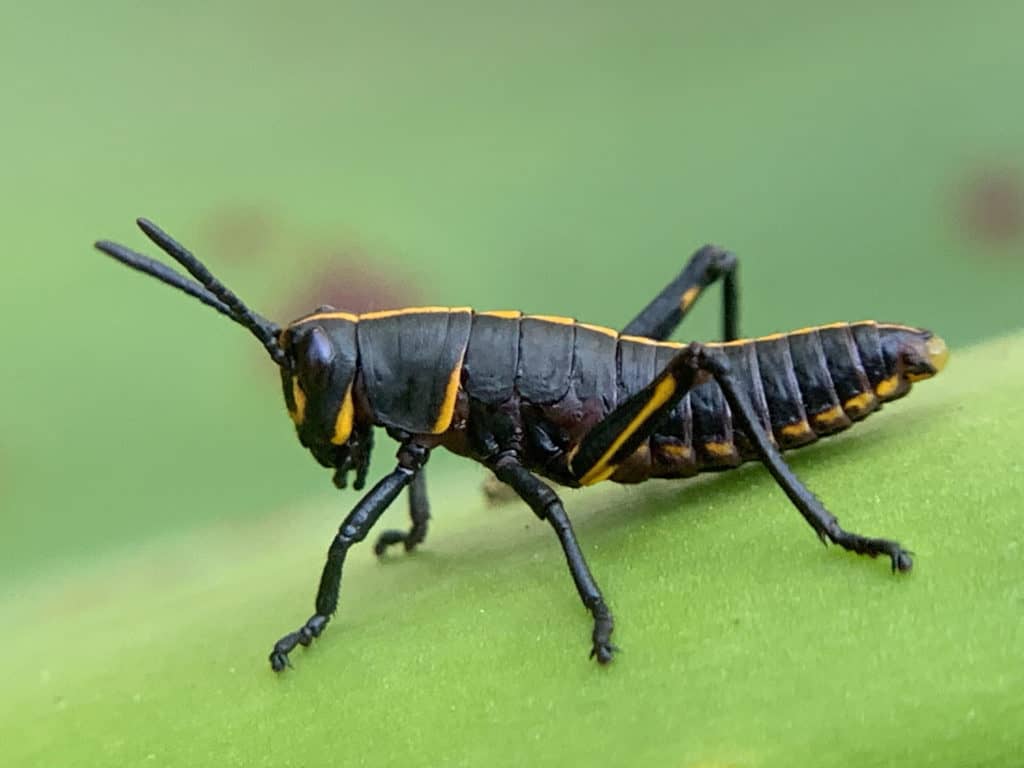 Lubber grasshoppers can be seen every spring in Volusia and Flagler Counties. Every year, they crawl out of the ground in a relentless search for food. As they feed, the chewing and stripping of foliage destroys the plants.

These grasshoppers are easily identified by their large size and vibrant colored markings. Usually, they can be found outside all over shrubbery, plants, and grasses. They chew irregular holes in plants and can destroy an average size plant in a matter of days.

The immature lubber nymphs are very different in appearance from the adult grasshoppers. Young nymphs are all black with a distinct yellow line running down their bodies. As they mature, they go through several molts. Each time they molt, they change from all black to a more orange-yellow color.

Lubber grasshoppers do a lot of damage to plants. Their favorite is sunflowers, but they will eat many different types of plants and grasses. When these grasshoppers emerge from the ground, they do so in large numbers. Finding 50 or more lubber grasshoppers on one plant is not unusual. 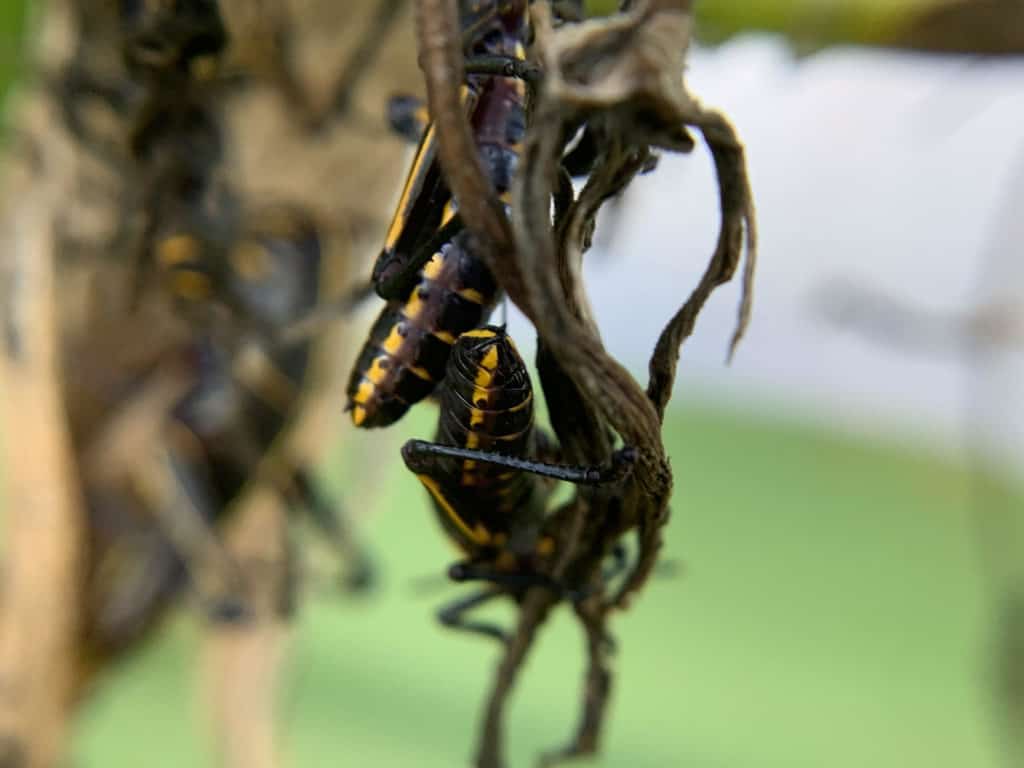 Not many predators will eat these grasshoppers. Lubbers secrete a vile foam, making themselves toxic to most predators. Some may even spit or make a hissing sound if they feel threatened. The foamy secretion is often called “tobacco spit.”

Lubber grasshoppers can be difficult to control. Directly spraying the grasshoppers with a pyrethrum may work if they are in their first or second molting. Larger grasshoppers should be removed by hand and destroyed. Using chemical sprays on mature grasshoppers usually doesn’t work well.

If you see these grasshoppers eating your favorite plants, call Dave’s Pest Control for a free consultation on how we can get rid of them. 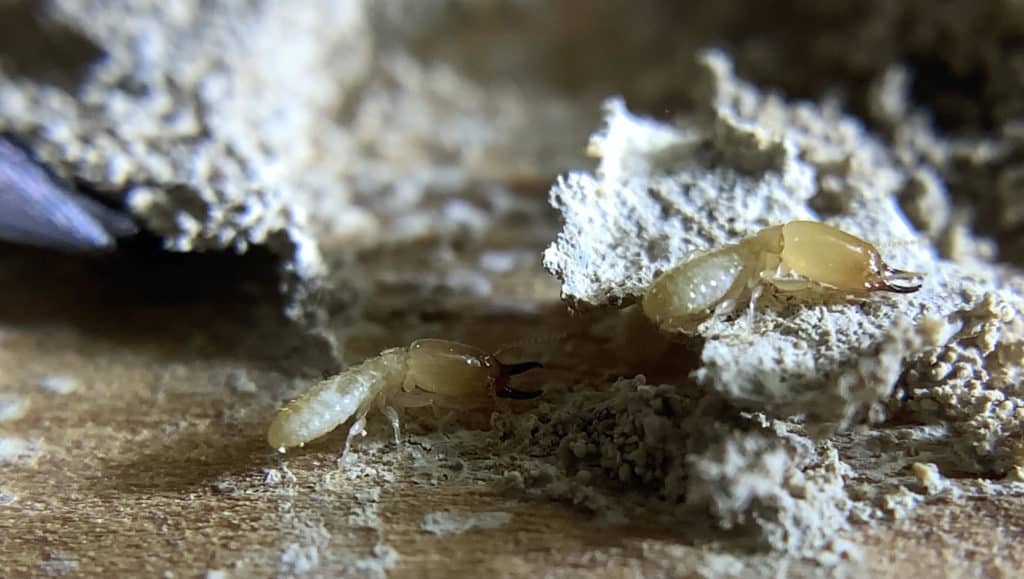 The eastern subterranean termite soldiers are responsible for defending the colony from attack. Ants and termites are mortal enemies. The intricate tunnels and hollowed out wood that termites create make perfect homes for ants. Epic battles between termites and ants are waged. Termite soldiers use their long mandibles in defense against the onslaught of any invader.

Damage from subterranean termites can go unnoticed for a long time before the culprits are found. Sometimes it can take up to five years before a termite colony swarms. When termites swarm, hundreds to thousands of small black bugs with long iridescent wings litter your home or place of business. This is an indication that a mature termite colony is nearby. 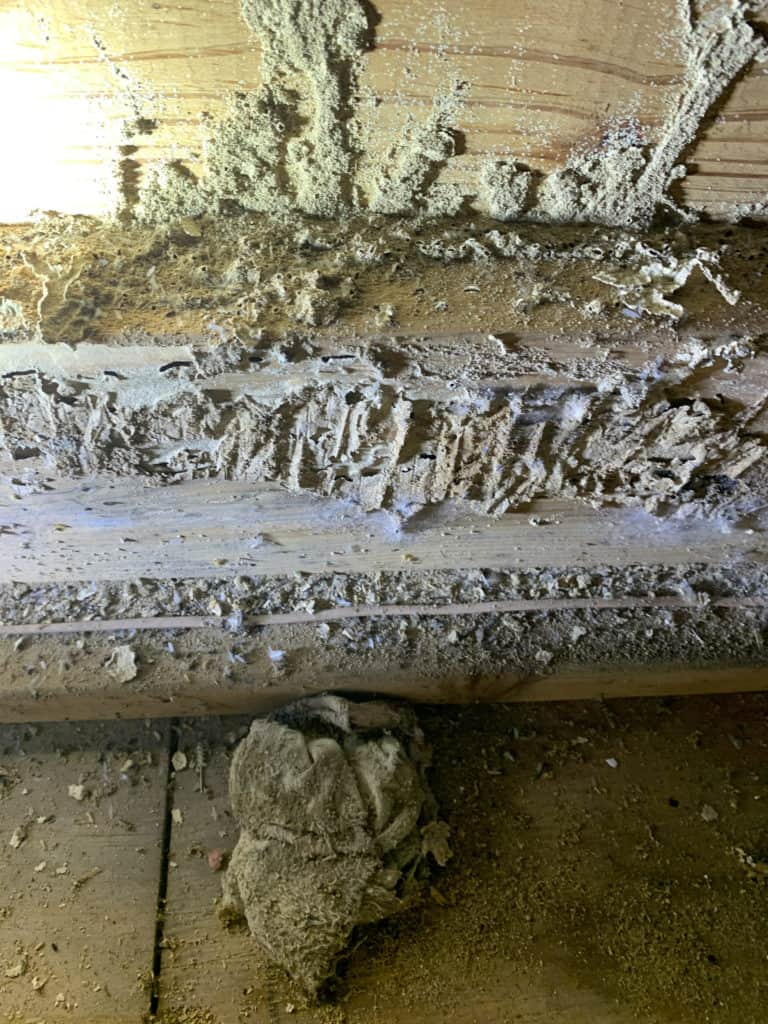 Termites live in a social order like ants do. There is a queen, a king, workers, and soldiers. These stations in life are called castes and many insect colonies have this common division of labor. Each caste plays a different role in the colony. If you were to take away one caste—the workers, for example—the whole colony would die off.

Many homeowners do some spring cleaning before the long days of summer set in. Trips to the local garden stores are common as people clean up their yards. For example, you may purchase new mulch for your landscaping beds. This simple purchase and chore can be like the Trojan Horse that concealed the Greek soldiers inside it to enter the city of Troy. Many months or years later you find subterranean termites in your living room wall that were hidden in the mulch you brought home.

In Florida, termites are responsible for millions of dollars of damage and considered one of the most destructive pests we have. Protecting your home should be as important as protecting your other assets. We all insure our vehicles for damage from crashes and accidents; your home should also be protected from damage by termites.

If you notice damage to your home or find hundreds of bugs and wings all over your home, there is a good chance that you have had termites for several years. 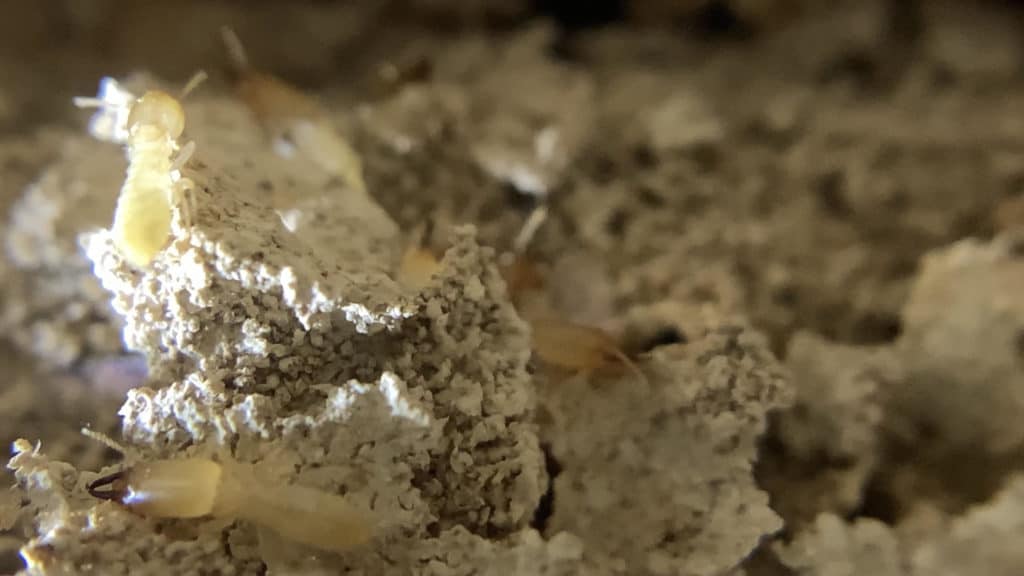 Owning and maintaining your home can be a lot of responsibility. Let Dave’s Pest Control take some of the burden off your shoulders. By providing regular maintenance and inspections, you can have the peace of mind of knowing your most valuable assets and your loved ones are protected from destructive, invasive pests in and around your home or place of business.

Call us today for a free consultation.