One of the most damaging pests in Volusia and Flagler counties is the eastern subterranean termite. They account for hundreds and hundreds of calls for pest control services annually. We see swarming termites every year invading our homes and places of business; undoubtedly, they are a menacing sight to behold.

Termites are a homeowner’s worst nightmare. They slowly destroy any and all wood they find. Subterranean termites live underground and seek out the cellulose in wood. They can be difficult to detect and difficult to get rid of. These tiny invisible monsters hiding behind your walls need to be quickly exterminated before major structural damage occurs.

In Florida, termites cause thousands of dollars in damage to homes and businesses. If you own property in Florida, chances of having a termite problem are particularly good.

There are over 2,000 species of termites in the world and roughly 40 species in the United States. In Florida, the three species that cause the most damage are eastern subterranean, drywood, and Formosan termites. 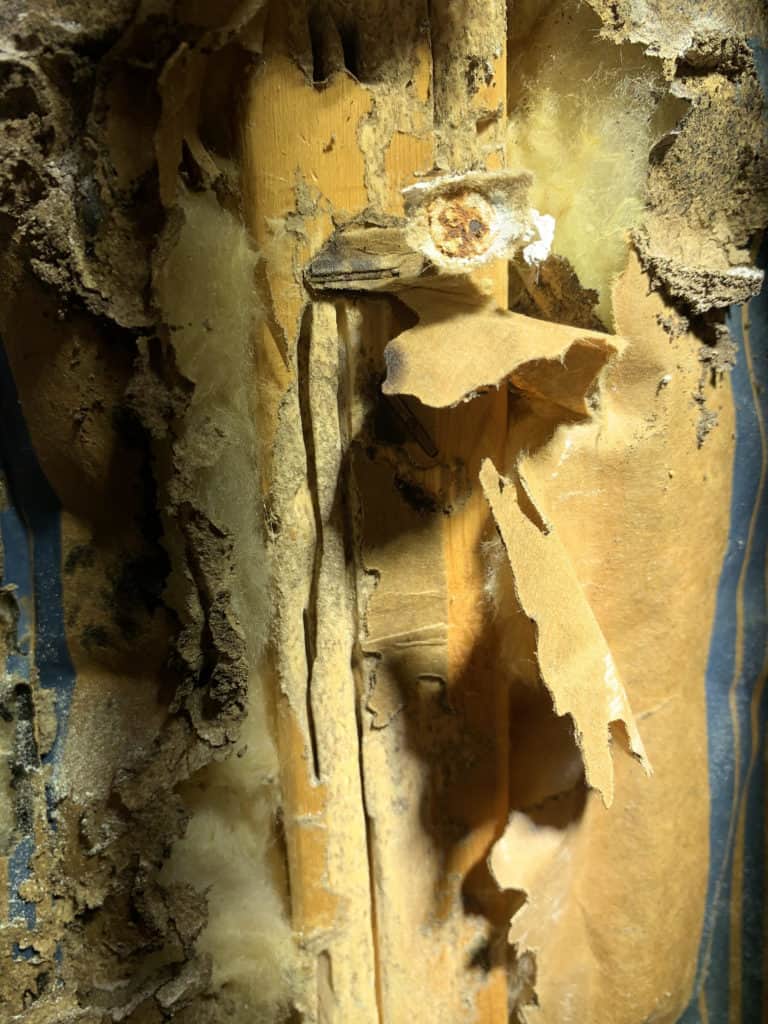 Subterranean termites make their colonies in the soil. They move from the soil into homes. Even a crack one eighth of an inch is all they need to gain entry to your home. They ingeniously build mud tubes or “tunnels” to travel between the earth and structures they are feeding on.

Some subterranean termites such as Formosan termites can have up a million or more workers in a colony. This one ‘’super colony’’ can infest several homes at once.

Traditionally, pest control companies dig a six-inch wide and six-inch-deep trench around your home. A liquid termiticide is poured into the trench in the quantity of four gallons per ten linear feet. The liquid termiticide will eliminate termites if they move through the soil containing the residual chemical.

To achieve a continuous barrier around the home, holes are drilled into any concrete or pavers surrounding the structure. Once the chemical is pumped into the holes, they are sealed up with concrete patch or specialized plugs.

Many of the newer liquid termiticides containing Fipronil can remain active in the soil from eight to ten years. However, soil can be disturbed by many processes, causing dissipation of the termiticide. Sunlight and ultraviolet light can also cause rapid dissipation of Fipronil, rendering it useless in protecting against termite damage.

There are other drawbacks in using a liquid termiticide to protect your home or business. Since subterranean termites build mud tubes in which to travel, they can easily circumnavigate above or below liquid barrier treatments. Subterranean termites can also move far below the foundation of a home or business and resurface to attack the inner walls.

In coastal towns like Palm Coast, Ormond Beach, and Daytona beach, there are millions of subterranean termites and are considered one of the most damaging pests we have. They indiscriminately destroy homes and businesses from the inside out. Further inland, homes in Orange city, Deltona, and Debary, have substantial subterranean termite colonies.

Many homeowners who have started remodeling a bathroom find subterranean termites that have been eating away at the inner wall studs. More often than not, the damage is costly and a major inconvenience, both money-wise and timewise.

Subterranean termites can go unnoticed for years before they swarm. If you see swarming termites inside your house, there is a good chance they have been inside the walls of your home for years.

Subterranean termites find food somewhat by chance. Worker termites fan out in all different directions looking for wood. When a worker finds a sustainable food source, it will use chemical pheromones to signal the other termites in its colony.

Worker termites are responsible for the entire health of a colony. They are the ones that feed the soldiers, the king, and the queen. While the king and queen are busy producing new termites, worker termites feed on wood and in turn feed the others. Soldier termites keep guard against invaders like ants, which have been the enemy of termites for over a 100 million years.

Ants will attack termite colonies by ripping the termites’ heads off and devouring their bodies. Soldier termites use their large, sharp mandibles to defend their fallen brethren; alas, it will all be in vain. Ants always have the advantage over termites in both speed and numbers. 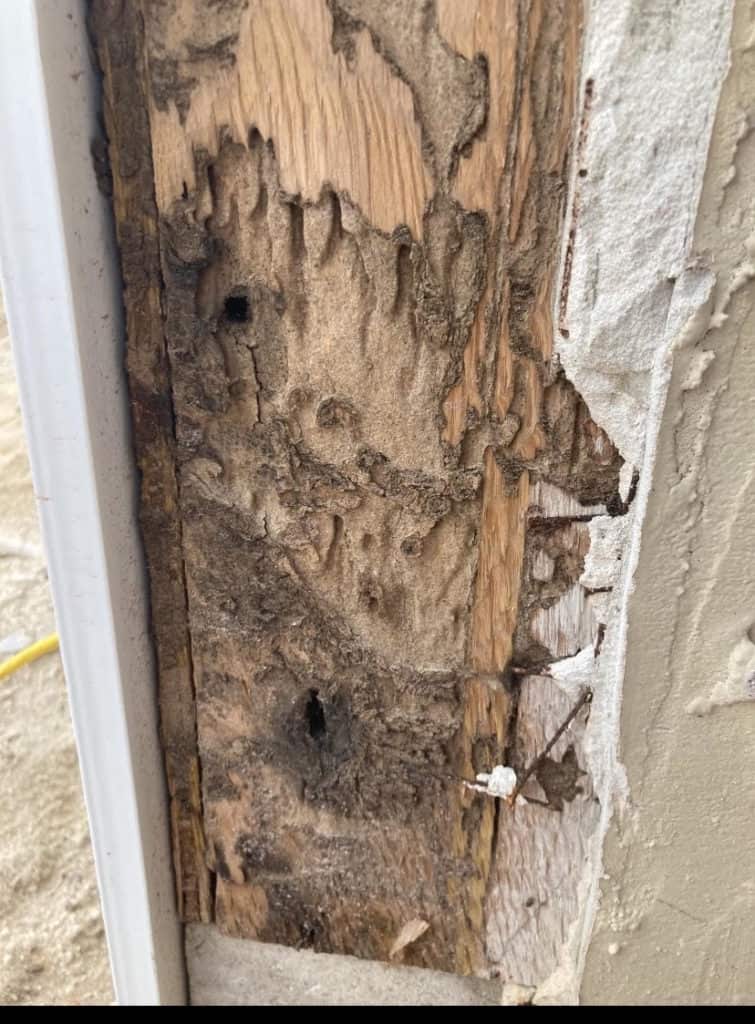 (Caste is a social ranking or a social insect system)
A typical termite colony consists of eggs, larvae, workers, soldiers, and a king (male) and queen (female). The colony life cycle begins with eggs that hatch to larvae. Nymphs become workers and soldiers which feed on cellulose.
Reproductive winged termites are called alates; they turn into a new king and queen. They lay the eggs that start the cycle all over again. This whole process can take from five to eight years. Overall swarming activity takes place in southeastern Florida from late February to late May and June.
The earliest termite fossil in known existence dates to over 130 million years ago. Termites are closely related to cockroaches; both are grouped under the order Isoptera (Greek for two pairs of straight wings).
For years termites were called white ants until the use of microscopes helped distinguish different features between the two. Termites, like cockroaches, have survived millions of years due to their social characteristics, their ability to be undetected by most predators, and division of labor much like ants, bees, and wasps. However, the termite’s big difference is any caste can be male or female, furthering the success of the entire colony. It is safe to say termites will be here for millions of years more.
Control and Prevention
Preventing termites from getting into your home can be achieved by not allowing water to accumulate along your home’s foundation. Fix plumbing leaks and replace wet, rotting wood. Trees and old stumps on your property should be inspected for termites.

The bait stations should also be placed in any area conducive to termites such as high moisture areas around the home’s foundation from air conditioning units, irrigation systems, and gutter downspouts. Other conducive areas are found near tree stumps, woodpiles, or any other place with a lot of wood or falling tree branches and limbs.

Inside each station is a large circular block of a highly dense formulation of cellulose and an insecticide called noviflumuron. Noviflumuron is an insect growth regulator (IGR) that prevents successful molting and development of subterranean termites.

This disruption in the termite’s development will lead to the decline and death of the entire colony. In scientific studies, Recruit HD bait was placed beside normal wood. Termites chose the Recruit HD bait matrix over the wood. Interestingly, the bait becomes more favorable the longer it is in the soil. The bait formulation remains effective for up to eight years.

The Sentricon baiting system is supported by Dow AgroSciences, a pioneering expert in the elimination of subterranean termites.

Liquid treatments can be used in conjunction with bait stations to provide a superior barrier of protection.
Liquid Termiticides are fast acting and can kill up to six feet from the treatment area. Liquid Termiticides can also kill by a secondary repellency and transfer of the chemical to other foragers. Having both methods of protection serve as backup in case one of the systems should fail.
Call us today for a free estimate for your home or business using Sentricon with Recruit HD.