Halloween makes us feel like we’ve rounded an invisible corner and are now on the straightaway to Christmas and the New Year. Before the chill of winter sets in, though, we enjoy the harvest season and the traditional happenings of this spooky holiday.

Creatures crawling around looking for blood, demons squealing, and ghouls out of their tombs are images meant to horrify us. Vincent Price’s bone-chilling narration in Thriller recreates all the spookiness of Halloween we feel every year when the end of October draws near.

Scary bugs, spiders, and wild creatures entering your home, however, can create a real Halloween nightmare.

Shorter days and changing temperatures bring insects and wildlife animals closer to your home. When we get cold temperatures in Brevard, Volusia, and Flagler counties, animals like raccoons and squirrels may break into attics seeking warmth.

Raccoons are notorious for breaking into attics to give birth. Most raccoon dens consist of a male and a female with two to five babies, often called kits.

Our wildlife experts have removed many of these mischievous raccoon bandits from many homes and attics.

Rodents like rats are a common problem especially in coastal towns like New Smyrna Beach, and Flagler Beach. The scrub brush and swampy mangroves are the perfect habitat for rats. They live and breed close to many homes and businesses, getting fresh drinking water from air conditioning run-off and food from garbage cans.

Barbecues often attract rats by the smoky smell of steak or chicken left lofting in the air hours after the coals are cold and grey. Dave’s Pest Control technicians have found and removed many rats nesting in barbecues.

October is a busy month for pest control exterminators due to many contributing factors. As Halloween approaches, and cool winds blow leaves from the trees, many bugs fall on roofs and the ground. They gain entry into houses and buildings, causing unexpected encounters that terrify humans. 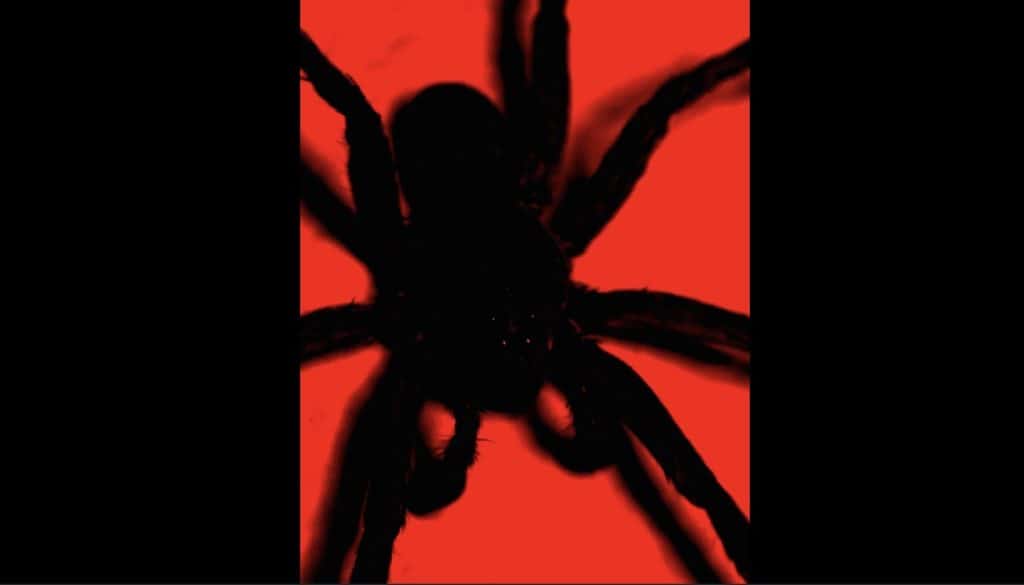 Spiders make surprise appearances in October leading up to Halloween. These eight-legged arachnids symbolize something scary and dangerous.

Many unsuspecting people put on a shoe or sneaker and get bitten by a spider lurking inside. Fortunately, most spiders we encounter are non-venomous and pose little threat to humans.

It is ironic that at this time of year when pest control technicians knock down real spiders and their webs, homeowners are spending money to decorate their homes with artificial spiders and webs. Halloween wouldn’t be official without spider web decorations—the artificial kind, of course.

However, real spiders can bite, and some can be quite painful.

Many different spiders spin webs. Why do spiders spin webs? Why are they so abundant in the fall? This unusual adaptation for catching prey has been continuously studied for hundreds of years.

No other spider causes more confusion than the brown recluse spider. They are about the size of a half dollar coin and are usually tan or brown in color with a distinctive violin shape on their backs. Many people who think they have them call for pest control. In fact, brown recluses are almost never seen and hide in spaces where humans seldom go. These spiders are found in stored firewood or in attics and cellars. Hollowed out tree trunks or under rocks are also favorite spots for a brown recluse spider.

The venom of the recluse spider is necrotizing which means it eats away the flesh. Muscle and nerve pain are also common; medical attention is critical when you are bitten. People react differently to different kinds of bite, but this is one spider that can kill you.

The black widow exists everywhere in Florida. They are usually in dark, dry corners, hiding from predators like lizards and geckos. Other areas where these spiders are found are barns, basements, in stored firewood, and in dense vegetation. Black widow spiders get their name from a disturbing but common insect behavioral trait. The female black widow often cannibalizes and eats the male after sexual reproduction. Because of this, male black widow spiders are harder to find than the female spiders that are easily found.

Black widow spiders are identified by a red hourglass shape on their abdomens. This spider has been ranked as one of the most venomous spiders in the United States. Their venom is much stronger than that of a rattlesnake.

A bite from a widow spider feels like a small pinprick at first, with very little pain. Within a few minutes after being bitten, pain and swelling set in, spreading rapidly to other parts of the body.

Fortunately, bites from widow spiders are rare and fatalities are low. Timely medical care can provide antivenom to stop the poison and reduce the reduce recovery time. 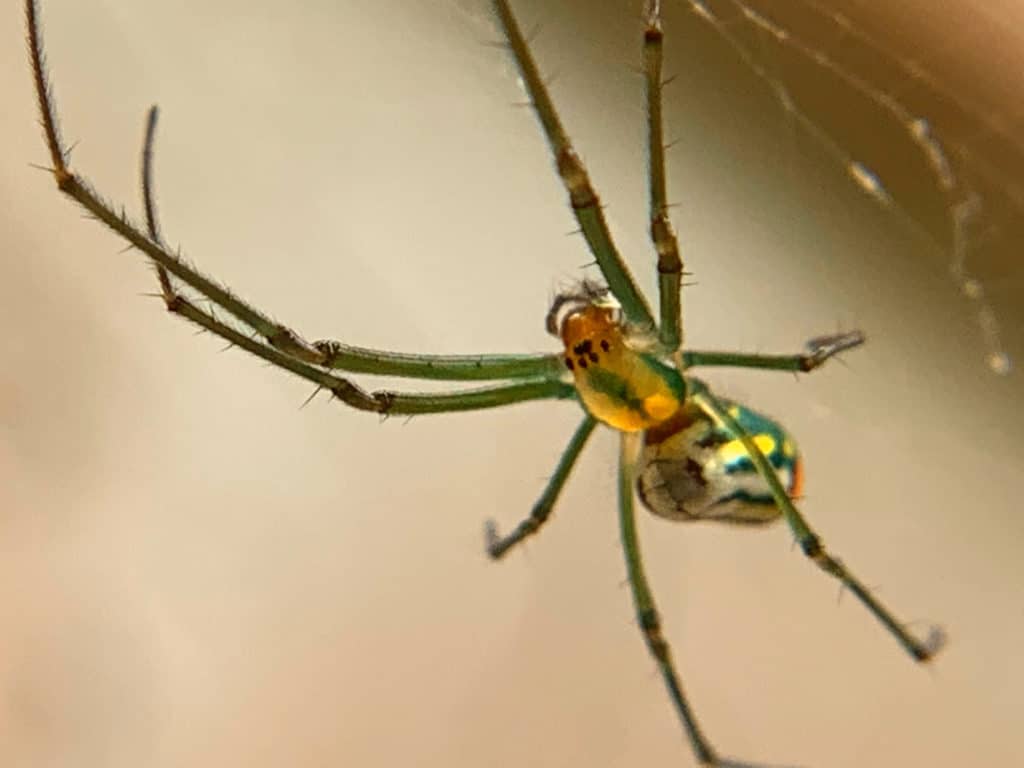 In our area of Volusia and Flagler counties, there are many spiders that spin webs. The Golden Orb Weaver is one of the most often seen and the most misunderstood. Weaver spiders can grow very large and spin enormous webs. Autumn brings out many orb weaver spiders as they reach reproductive maturity. They crawl out from their hiding places to spin webs, feed, and deposit eggs.

Orb weaver spiders, sometimes called banana spiders, are not dangerous to humans, but like black widows, orb weavers do contain a neurotoxic venom which attacks the nervous system of their prey. They are large spiders with large webs. If you can imagine yourself running through the South American jungle being chased by angry natives throwing spears at you, it’s this kind of web you would imagine plunging into as you try to escape.

It has been documented that in the past, Polynesian fishermen used the thread of golden orb weavers for fishing line. They would collect the silken webs and spin many strands together, forming a strong line.

More recently, studies have shown that the orb weaver’s silk is hundreds of times more durable and stronger than what can be made synthetically. In medical surgery for the repair of tendons and ligaments, orb weaver silk can be used that lasts much longer than traditional methods used in surgery.

As it is so strong, it is being researched for use in body armor and bulletproof vests for the military. The molecular structure of the orb weaver’s silk is tougher and lighter than Kevlar.

These spiders spin their webs on many manmade structures, often prompting a call to pest control. Although they are not deadly to humans, nor does their bite cause necrosis, a bite from a large orb weaver spider is very painful and causes cramping, stomach pain, and nausea. Since each person reacts differently to the toxins in a spider bite, one should always seek immediate care when bitten. Usually, these spiders choose to run away rather than confront you.

They only bite when they feel threatened, or when their body is pressed down so that they fear for their lives. Orb weavers cannot control the amount of venom they inject. Because of this, a bite either could contain a large amount of venom, or little to nothing which is a “dry bite.”

Another spooky spider is the huntsman spider, sometimes called wood spiders or crab spiders. These large, eight-eyed arachnids are often seen at night when they are out hunting for prey. They disable their prey with their neurotoxic venom and make a tasty meal of their catch.

This class of spiders are also called wandering spiders. They do not spin webs like orb weavers or black widows. They remain super-still when they sense danger, not moving a hair; then in a flash, they dart away and disappear.

The spooky, dark candlelit nights in homes during the seventeenth century and early eighteenth century lent an eerie atmosphere to many great works of gothic literature. In 1818, Mary Shelley wrote the still popular, fright-filled novel, Frankenstein, while sheltering from an unusually cold and rainy trip to Switzerland. It was a time of great famine and darkness. Many speculate that it was these dark, haunting cold nights which prompted and shaped the idea for the nameless monster created by Shelley’s protagonist, Dr. Victor Frankenstein.

The fall months leading up to the end of the year may bring many pests to terrorize your home and neighborhood. You can keep unwanted invaders and undesirable, scary, creepy, crawly spiders and bugs out of your home by calling Dave’s Pest Control.

Call us today for a free estimate for your home, condominiums or business.

Have a spooky and fun Halloween!
Dan