Imagine being able to jump 100 feet in the air with ease. Climb up a wall, and walk upside down on the ceiling without gravity pulling you down on your head. Imagine hearing a whisper from 50 feet across the room. These abilities seem ridiculous for a human to do, but for insects, they can do just these things and more. They defy gravity. They can hang upside down and climb up walls. They can they jump insane distances. They are small, but yet they pose a giant threat to the human race.

Insects have been on the Earth for millions of years. There is fossil evidence the first insects lived around 412 million years ago and have remained virtually unchanged today. Time travel to the Jurassic period, 150 million years ago, and we will see thousands of bugs that look exactly like they do today. Flies that landed on our Neanderthal ancestors’ food are very much the same flies that we swat away from our food today.

Two of these bugs that have plagued humans throughout time are fleas and spiders.

Fleas are a biting nuisance.

Fleas are our worst nightmare. I couldn’t’ imagine living so close with animals for thousands of years without any pest control and medication for fleas. Fleas are not just bothersome, they are deadly. They multiply exponentially and feed on blood. They can detect the carbon dioxide we emit from our breath, then jump two feet in the air, landing on our legs. With sucking mouthparts, they will then feed on your blood.

In 1894, fleas were discovered to be responsible for some of the most devastating plagues throughout history. Millions and millions people died from being bitten by fleas that carried a bacteria called Yersinia pestis. Nobody knew what caused sickness before the nineteenth century. Most believed in evil spirits or other divine intervention that caused such pain and suffering. The discovery that an insect could cause so much suffering and death upon the entire known world was revolutionary. This knowledge paved the way for modern pest control today.

If a six-foot tall human were to jump as high as a flea, you would reach about 330 feet in the air. Fleas jump this distance by using a set of hind legs which are attached to a spring inside the flea’s body. Energy is stored in this internal spring and released by a latching mechanism that is not fully understood just yet. In a science experiment, a replica of the Empire State Building in New York City was used to show how high a flea can jump. In almost every jump, the flea almost cleared the top of the replica building.

In order to lay eggs, female fleas need a blood meal. They will lay their eggs usually about 48 hours after feeding on blood. Eggs are laid on almost any surface. After two to five days, the larvae will hatch. They will feed on dried blood or what’s called “flea dirt.”

In one week, the larvae will spin a cocoon in which the larvae will pupate. The flea will fully form in a week, but the flea will not emerge until the conditions are right and it senses a blood meal. Cocoons can remain unhatched for up to six months. The cocoon is a protective shell. Most atmospheric conditions and insecticides will not harm the flea inside. Once the flea hatches, it will jump on to a host for blood, and start the cycle again.

Fleas have piercing / sucking mouthparts to extract blood from a host mammal. Their saliva irritates the skin causing itching and rashes. If you scratch a flea bite with dirty fingernails, you can transfer bacteria into the bite causing a secondary infection, so be careful! In Florida, fleas are a common problem from Palm Coast to Titusville and every community in between. Our technicians at Dave’s Pest Control are experts in exterminating with fleas. Both our lawn spraying crew and pest control technicians exterminate fleas depending on whether the bug problem is inside your home or in your yard (or both).

Spiders have been on Earth for over 400 million years. The largest spider fossil measured almost 14 inches in length. Forget killing that spider with a boot – you would need a bazooka!

Spiders are usually separated into two groups: hunting spiders and web spinning spiders. Hunting spiders do just that, they go out and hunt. These are the spiders that most people will see prompting a call for pest control. In Florida, the wolf spider and the huntsman spider are the most common spiders seen around homes and businesses. Hunting spiders have excellent sight, speed and agility. They will hide behind natural objects and pounce on their prey. Wolf spiders carry their babies on their backs and if you try to hit a wolf spider, all of her babies will quickly scatter away.

Spiders that spin webs are what most people think of when they think of spiders. They will make a sticky web which will catch unsuspecting prey. The most common of these spiders are funnel web spiders and orb weaver spiders. We also find garden spiders and spiny orb weavers that make webs. Spider webbing is incredibly strong. In fact, the silk-like threads from orb weaver spiders were used as fishing lines by Native Americans.

Many spiders can jump many times their body length. There are over 4000 species of jumping spiders in the world, two which call Florida home. The Grey Wall Jumper and the Pan Tropical Jumper. They both are usually found around homes and buildings, and can be seen around lights feeding on insects. They are considered a beneficial spider to have around.

Spiders usually have six to eight eyes. In fact, one of the best ways to identify spiders is through the eye pattern. Despite having so many eyes, most spiders are not believed to have good eyesight. They can see in color and have good depth perception, but cannot see beyond a few inches around themselves. They instead have sensors on their legs that can feel and taste the world around them. Spiders have a strong sense of smell. Not only can they smell prey, they can smell changes in the environment which helps them find shelter from the cold.

The black widow spider is a well-known and well feared spider. Found mostly in the southern United States, they are easily recognized by their small black bodies and bright red hour-glass on their abdomen. Although they can be deadly, humans usually get bit accidentally. For example, you would have to press up against one, say by laying down in bed or putting your shoe on, to get bitten. There are actually four kinds of widow spiders in Volusia county: The northern black widow, the southern black widow, the brown widow, and the red widow.

All widow spiders are venomous. Venomous and poisonous are two very different things. A venomous creature injects toxic compound into a body. Spiders, snakes, bees, and wasps are all venomous. Poisonous means toxic compounds are secreted, such as the poison secretions from the South American dart frog.

Venom is made of proteins, enzymes, and other substances that destroy cells and disrupt nerve impulses. Spiders inject their venom into their prey to disable them. After the prey has been injected, the enzymes break down the insides of the prey, making the meal able for the spider to consume. Since the development of anti-venom in 1895, cases of death resulting from venomous insect bites have steadily decreased. Most people who are bitten live to tell their tale. We have had many sightings of black widow spiders in the cities of Deland and Deltona.

In Florida, the golden orb weaver (sometimes called banana spiders), are a large, brightly colored spider that hangs in the middle of a beautifully spun web. They are not aggressive, but can deliver a painful bite if provoked. Their venom is non-lethal to humans. Considered a beneficial spider, they eat mosquitos, flies and gnats. These are good spiders to have in your garden.

The daddy long-leg spiders are Pholcid spiders. They are very thin and somewhat delicate. Also called cellar spiders, they will vibrate when a nest is disturbed. They do not pose a threat to humans, but are a major nuisance. They can be found collecting in large groups in dark corners like in closets and attics. These spiders are known to hunt and kill widow spiders giving an impression that there bite to a human is more potent than that of a widow spider. This is untrue – daddy long-leg spiders cannot bite a human.

This hermit favors dark, damp environments like crawl spaces and stored fire wood. Bites from a brown recluse are rare since these spiders hide in places humans seldom go. The venom from a brown recluse spider is extremely dangerous. It is a hemotoxin similar to snake venom from a pit viper or rattle snake. The venom can cause necrosis, which is when skin will turn black and die. A large open wound will form, and will require intense medical care. Contrary to folklore that we hear from customers around our Port Orange business, brown recluses are not native to Florida. You will not naturally see a brown recluse in Daytona Beach unless it was transplanted there via a shipment from somewhere else. 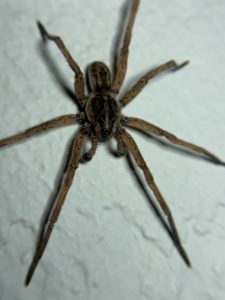 Even though these spiders are not deadly to humans, they can bite if they feel cornered or if they feel threatened. The bite can cause mild to moderate pain with localized swelling. This would be similar to a wasp or bee sting. They will eat cockroaches, small lizards and other small invertebrates. When they find a target, they will pounce and inject venom, liquefying their prey into meal. Wolf spiders are often mistaken for brown recluse spiders. The experts at Dave’s Pest Control know the difference and can make a proper identification; however, we recommend getting a good picture as we cannot ID a smashed bug on a paper towel!

Knowing that bugs can cause harm to us, keeping pests away to protect our lives is an important part of living. Regular pest control treatments will help reduce your chances of seeing pests in your home or business.
These tiny organisms have sophisticated and complex lives that are dependent on the same things we need for survival: food, shelter and water. When bugs enter our homes and businesses, help is a quick phone call away. Call us at Dave’s Pest Control.