Lawn care is a huge industry in the United States today. Almost every home and business in America spends money on lawn and landscaping materials. Hundreds of hours are spent daily in mowing and caring for lawns. The industry is extremely competitive and filled with great technicians who work very hard at achieving lush, green lawns. Since it is warm all year long in Florida, lawn care is in high demand. In our area of Volusia and Flagler counties, we have an army of highly trained lawn technicians with years of dedicated experience ready to work for you.

The Birth of Lawns

In Europe during the Middle Ages, grazing animals would clear grassy fields. The word “lawn” was used to describe an open field or opening in the woods. Having an open space around a structure most likely came from forts and castles. It was helpful to have a clear sight all around you so you could see if danger was headed your way. In contrast to castles with open lawn space, most homes at this time used all available land they could to grow crops and keep livestock.

By the seventeenth century, wealthy landowners would grow amazing gardens as part of their rich estates. The first landscaping tool was probably the scythe. It was a tool for cutting wild grasses and crops. It had a long, curved blade that was attached to a long wooden pole. At the end, two short handles would protrude for gripping with your hands. This was no doubt labor intensive if you were to cut large acres of land. Only the wealthy could afford a well-maintained lawn and landscape.

In 1830, Edwin Beard Budding filed a patent for a machine he invented. He described it as a new machine for cutting grasses and food crops. He got the idea from textiles that would use cutting cylinders to trim wool. He would later in life manufacture and sell thousands of his machines.

In the decades to follow, adjustments had made the machine lighter and by the end of the century, a gas-powered version was made by Briggs and Stratton. The gas-powered lawn mower had an immediate need in the suburban homes following World War 2. 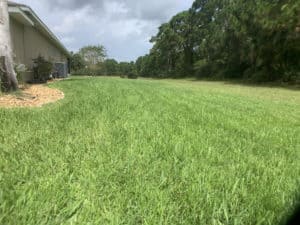 William Levitt’s model of suburban housing surrounded by green grass was the model that the rest of the country used in the post war housing boom. With the aid of the lawn cutting machine invented years ago, homeowners were able to cut and keep up with their lawns with ease.

At the same time of the housing market boom of post-World War Two, we saw huge developments in the manufacturing of pesticides for residential use. The old ways of life were being challenged as more and more people embraced the new age of science and technology.

It had always been known that farming the same piece of land for crops year after year depleted the soil of nutrients. Eventually, crops would fail in the same plots that yielded good harvests years before.

In 1840, a German chemist named Justas Von Liebig was leading the way for organic chemistry. He is credited for the creation of the modern laboratory as we know it today. Many of his papers have helped our understanding of what nutrients are needed for plants and crops to grow. He revolutionized the field of chemistry with his inventions for analyzing chemical data.

Liebig found that all plants absorb nitrogen. They can do this both through the air and in the soil through their roots. Plants also need mineral nutrients such as phosphorus, potassium, magnesium, calcium, iron and sulfur. Healthy plant growth must have these nutrients, and if one nutrient is lacking, the plant could suffer.

After a few failed attempts, his experiment to deliver nitrogen into plants with mineral salts was successful. Nitrogen salts would dissipate and leach out quickly from the soil by rainwater. By 1858, he was able to develop a fertilizer that remained in the soil and could deliver nutrients to plants. 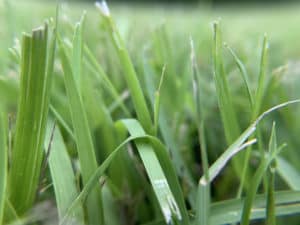 In the years to follow, the manufacturing of synthetic chemical fertilizers became a new and booming industry. Synthetic fertilizers paved the way for the future of farming.

In 1909, ammonia was obtained from hydrogen in the laboratory. This was an incredible achievement since nitrogen is in the air, and could not be exhausted. The first manufacturing plant that produced nitrogen fertilizer was in Germany in 1913. The use of fertilizer revolutionized agricultural farming across the globe.

In the 1950s, urea and formaldehyde were combined with nitrogen to produce slow releasing fertilizers. Sulfur coated urea replaced ammonia nitrates as it was less expensive to manufacture and was not as explosive as ammonium nitrate. This new formulation could now supply and hold nutrients in the soil for longer periods of time. This would give crops a slow but steady supply of nutrients. Additionally, the soil would remain fertile, allowing for a successful harvest on the same plot of land year after year.

The primary nutrients needed for plant growth are Nitrogen, Phosphorus and Potassium. Fertilizer bags indicate these nutrients by the chemical symbols of N, P and K. Other nutrients like Lime will help balance the PH level in the soil. Helping your soil to be less acidic and more alkaline will aid your lawn in nutrition availability. Lime is made from ground limestone and naturally contains calcium carbonate and magnesium carbonate.

Iron is also an important nutrient for a healthy lawn. A lawn with an iron deficiency will be spotty and yellow. Iron is important for making chlorophyll, which is a green pigment essential for photosynthesis.

Fertilizers helped farmers produce more crops and as a result, people had more access to food than ever before in history. Without fertilizers, we would not be able to feed the growing populations on our planet.

After the war, returning veterans moved to homes in the suburbs. Incentives drew thousands of war veterans away from the noisy and crowded cities, and into the quiet and safe neighborhoods of suburbia.

The new homes of the suburbs had lawns which needed care and maintenance. Homeowners were now able to purchase fertilizers to grow and keep their lawns green. Herbicides killed off unwanted weeds, and fungicides helped eliminate fungus diseases.

In Volusia and Flagler counties, the most common grass type is Saint Augustine. This grass type spreads by stolons. Stolons spread across the soil just above the surface, and root itself a few feet away. This new “daughter” plant will grow and produce its own stolons. An entire lawn of St. Augustine grass can be many interconnected plants. 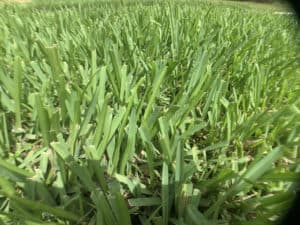 St Augustine grass is somewhat drought tolerant and has large, wide blades. It is a very thick, coarse grass and is good at keeping weeds out. When watered and fertilized, it has a nice green color.

Zoysia grass is another common sight in Florida lawns. Like St. Augustine, Zoysia grass is also coarse and thick. This grass does well in Florida’s hot climate. Many homes have a mix of several different types of grass including Bahia grass and centipede grass.

The southern chinch bug is an ongoing problem in St. Augustine lawns. They are small insects with sucking mouthparts. They will extract nutrients from the grass and stunt its growth. Large, brown spots will develop in a lawn with chinch bugs. Our technicians at Dave’s Pest Control battle chinch bugs all year long, especially along the coast in Flagler county. The cities of DeLand and Deltona, which are located more inland, also have a lot of chinch bug activity. They are best dealt with by using systemic insecticides over standard pyrethrins.

Diseases can also cause damage to southern lawn grass like St. Augustine and Zoysia. Brown patch disease, or sometimes called large patch, is a fungus that will grow in the turf. High humidity during the day and cool nights are perfect conditions for diseases like brown patch to develop.

Other diseases like Grey leaf spot, Dollar spot, Fairy ring fungus, and Rust can adversely affect your lawns health. If you have both a fungal disease and insects like chinch bugs or mole crickets, your lawn’s health will be severely stressed.

Today’s line of fertilizers, insecticides and fungicides are better and safer than ever. All the products we use at Dave’s Pest Control will provide excellent results, keeping your lawn healthy and green. It’s critical to have a Pest Control company with lawn techs who know how to properly mix appropriate chemicals to keep lawns green.

Crabgrass is an especially important weed that invades lawns not only in Florida, but all over the United States.

Crabgrass is a summer annual. It was brought to the United States in 1849 as a foraging crop for livestock. It soon spread throughout the states and quickly became a nuisance.

Now classified as an invasive weed, crabgrass has become a difficult problem that plagues every lawn. At Dave’s Pest Control, we use a special blend of pre-emergent herbicides to prevent crabgrass. These work by adhering to soil to prevent growth. Regular fertilization will keep your lawn thick and full, also helping to prevent crabgrass.

Other weeds like nutsedge, spurge, and other broadleaf invasive weeds can spread quickly in turf grasses. Our specialty blended weed controls are applied by our highly trained technicians.

Today, lawn care is a billion dollar industry. It is estimated in 2019, 99 billion dollars, or about five hundred dollars per household, was spent caring for lawn care. In fact, the United States applies more water to irrigation of turf grass than to all of our food crops combined.

The modern home today with a perfectly cut and fertilized lawn is easier than ever to achieve. Our expert technicians at Dave’s Pest Control have a lawn care program tailored to your lawn’s specific needs. We know how to keep your lawn green and weed free. We can identify potential problems before they occur. We are constantly training and learning from industry experts to keep current with today’s lawn care best practices. If you want a green lawn, call us today for a free estimate for your home or business.