Many people at some point in their lives have been stung by a wasp or bee. For most, the initial pain from a sting fades in a few hours. The stinger, if there is one, is removed and a topical analgesic like Benadryl or just plain ice can reduce the pain. For others, a sting is a life-threatening situation calling for immediate attention from a medical professional.

Then there are those that have the misfortune to be stung repeatedly by many wasps. Unfortunately, this happens frequently because stinging insects like wasps send attack pheromones to the others in their colony. This defense mechanism ensures the survival of the whole colony. 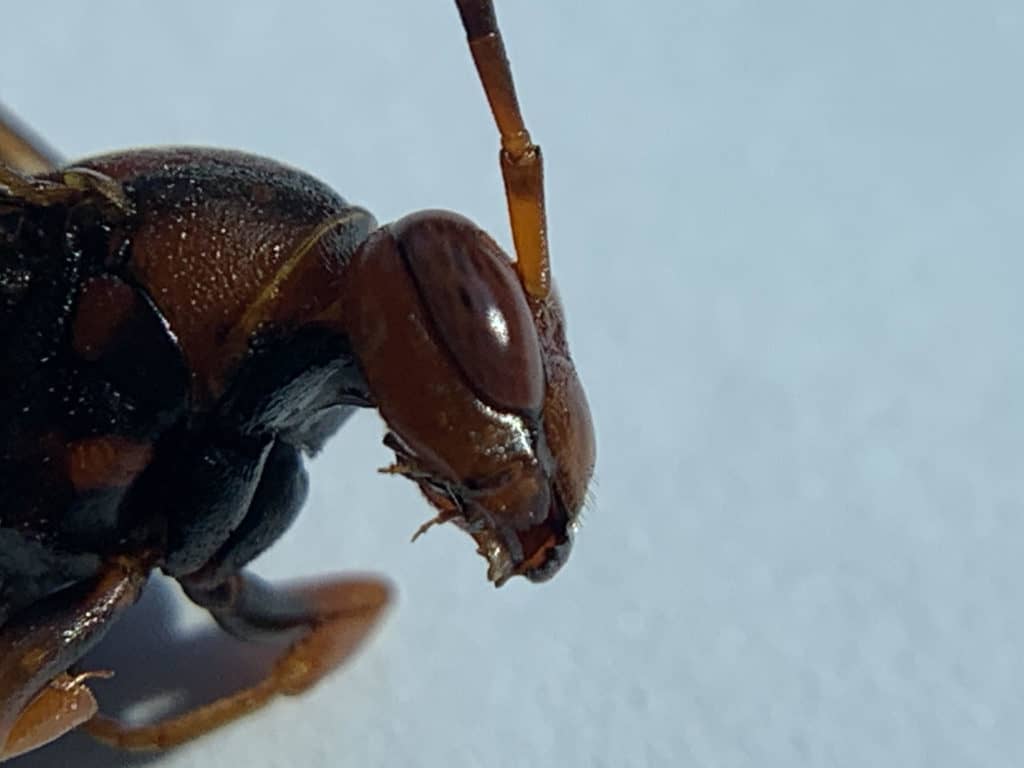 Of all stinging insects, the Africanized honeybee is probably the most feared by the American public largely due to the media’s sensationalized stories and videos.

Africanized bees, also called killer bees, were accidentally produced by crossbreeding African honeybees and western honeybees. One day in Brazil in 1957, as scientists were studying African bees, a few of the bees escaped. They successfully bred in their new habitat and these invading African bees decimated the more docile European bees. African bees will kill the European queen and replace her with their own queen.

This hybrid species of bees is extremely aggressive and sting at the slightest provocation. When one stings you, pheromones are sent to and detected by the other bees. In an attack by Africanized bees, the situation goes from bad to worse; they will not stop stinging until the perceived threat is gone. People can be stung well over 10,000 times, putting any such person at grave risk of death.

In Arizona in 1997, a 71-year-old man and his sons were cleaning up a property they owned for new tenets. The old man accidently caused a nest of killer bees to vibrate. The bees immediately went on the attack, stinging him on his face and eyes thousands of times. Hundreds of them went down his gasping throat and down his esophagus to his lungs. While he was still alive, he stumbled to find help but was not able to get to anyone. He fell to the ground, succumbing to the vicious attack.

Attacks such as this are rare; however, we should always be aware of our surroundings when working outdoors.

Fortunately for us in Volusia and Flagler Counties, there are no killer bees to worry about. 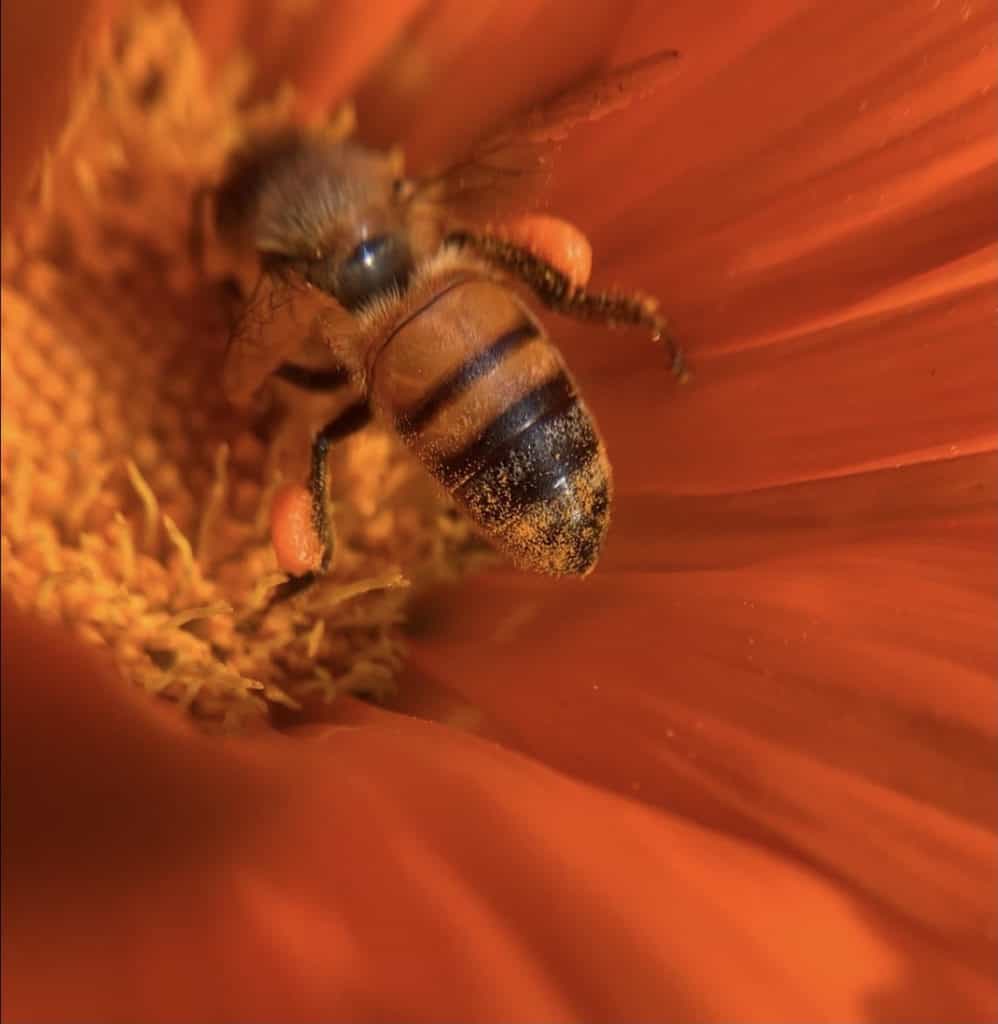 Carpenter bees are a major nuisance and predominately more active in the spring than other months. They get their name from the nine-inch holes they bore in wood to nest in. Carpenter bees can cause significant damage to soffits, siding, or facia where they lay their eggs if left untreated for long periods of time. Additionally, they can fly aggressively around you, divebombing at your head and face. The males do not have stingers, and stings from carpenter bees are rare. 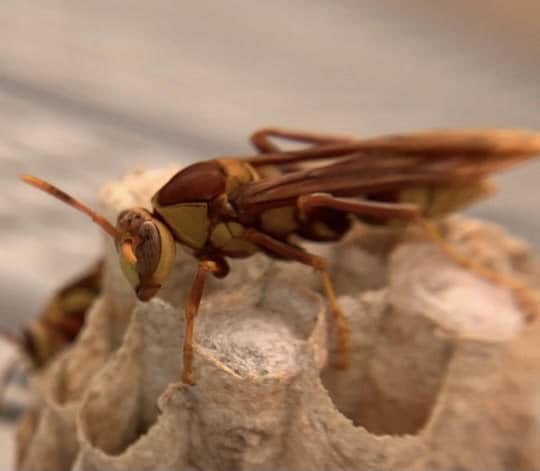 The two main species of wasps we have in Volusia and Flagler Counties are the cicada killer wasps and paper wasps.

The sting from a paper wasp can be quite painful, and the swelling, redness, and itchiness can last up to three to five days after you’ve been stung.

Paper wasps make their nests under soffits, eaves, patio furniture, and barbecue grills. They are also commonly found in tool sheds or other outdoor areas where garden equipment is stored. Paper wasp nests are made from deadwood and plant stems mixed with their saliva and are a light brown to grey in color.

Cicada killer wasps have yellow and black bands around their bodies, similar to yellow jackets, but at two inches in length, are much larger. They are solitary wasps and are the largest wasps in the United States.

Expert hunters, these wasps hunt for cicadas in the trees. Using their large, barbed stingers, they stab and pump venom into hapless cicadas, paralyzing them instantly. A female wasp lays an egg on top of the cicada whereupon a male wasp fertilizes the egg.

Once fertilized, the wasps carry the paralyzed cicada down into their underground burrows. Once the egg hatches, the newly born pupa will feed on the still paralyzed cicada until it can build a cocoon and a new wasp flies out of the ground next season.

Cicadas emerging from their underground nests can be an alarming sight. Hundreds of giant wasps rise, seemingly out of nowhere, and fly low to the ground. This shocking image often prompts people to call pest control technicians or to lawn care professionals, seeking help from the apocalyptic-like wasp invasion.

I don’t encourage it, but the truth is, you can stand directly within a swarm of cicadas and not get stung. These wasps want nothing more to do than hunting down cicadas in the trees so they can mate and complete their life cycle. 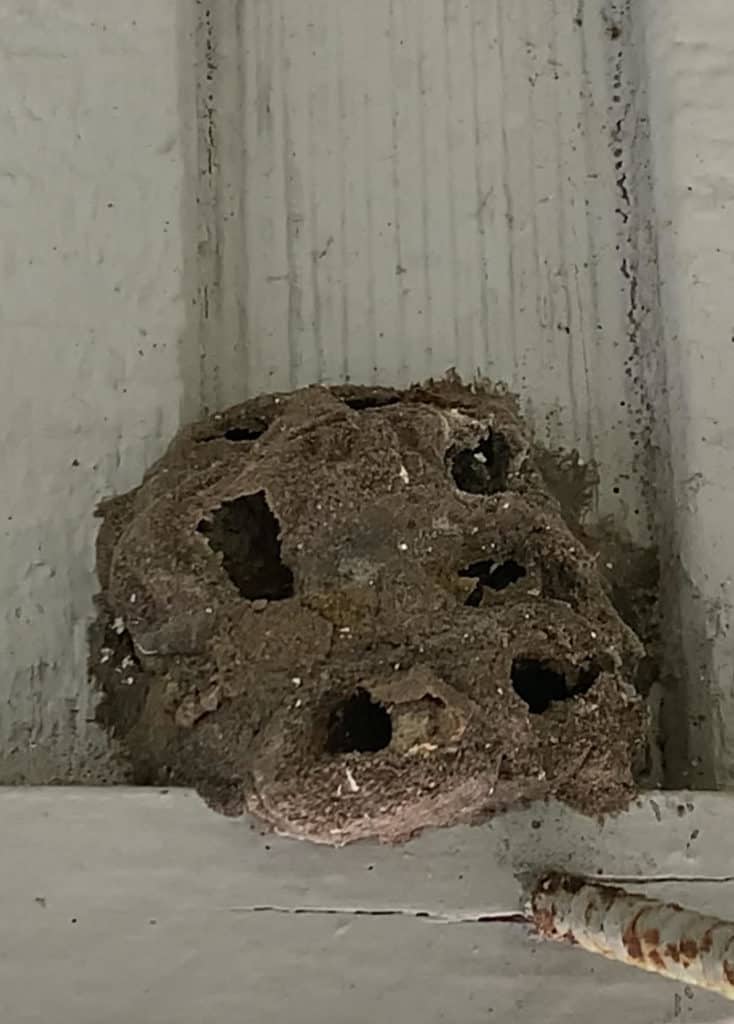 Mud daubers, sometimes called mud wasps or dirt daubers, are solitary wasps and do not live in large colonies as bees do. They are docile wasps that are more interested in pollinating flowers and paralyzing spiders than stinging humans.
Mud daubers build mud nests on the sides of brick walls, attics, crawl spaces, and any other flat surfaces like stucco, concrete, and cement.

As the name suggests, mud dauber nests are made up of mud and enzymes from the wasp’s saliva. The nest becomes rock hard and difficult to remove. The porous nature of stone and brick causes an unsightly stain after a mud dauber nest is removed. Nests resemble big, round blobs, while other species make organ pipe shapes nests. If you break open a nest, you often find either larvae cocoons or paralyzed spiders packed into small chambers. 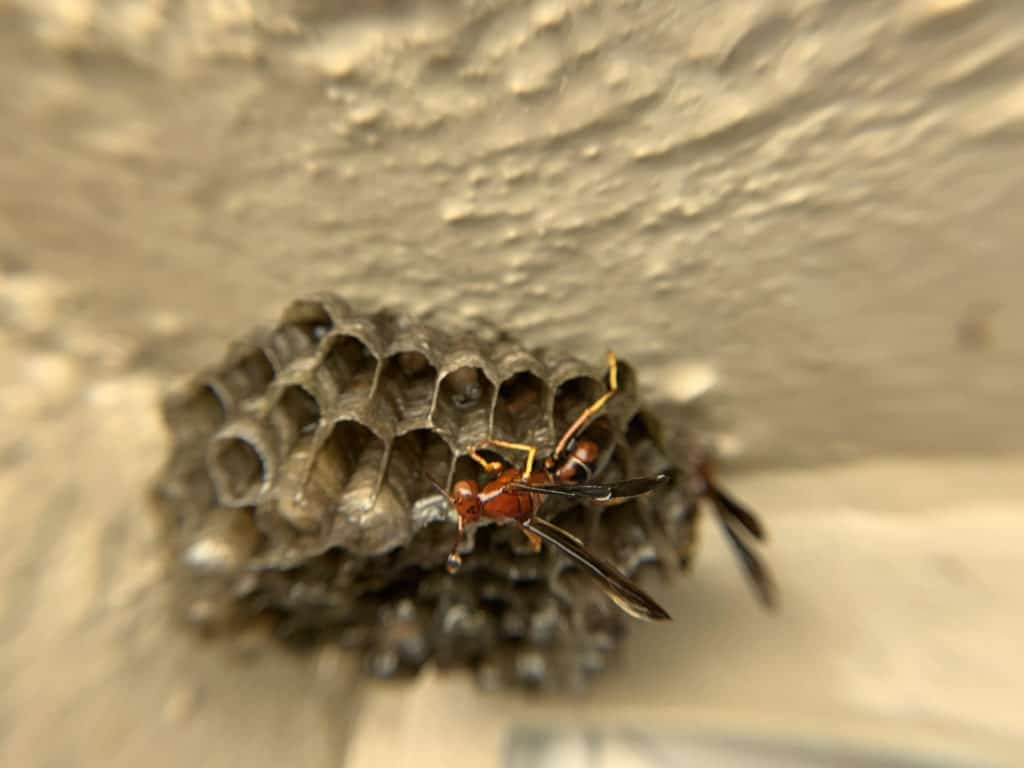 At the heart of the chaos theory lies the butterfly effect. Created by Edward Lorenz, the small flapping of butterfly wings weeks earlier can bring about tornadoes and destruction elsewhere. This is a metaphorical example of how one seemingly unimportant event can have a tremendous impact somewhere else.

In February of 1996, Birgenair Flight 301 crashed into the sea taking 189 lives while en route to Germany from the Dominican Republic. After a long and painstaking investigation, it was determined that a mud dauber nest clogged one of the three pitot tubes—which are mounted on the outside of the aircraft—sending contradictory air speed information to the crew and autopilot system. Believing the airspeed was too high, the captain raised the nose of the plane and reduced power to the engines thereby setting off a disastrous string of events that culminated in the crash.

In the aftermath of the crash, the FAA issued directives to include a blocked pitot tube sequence as part of standard pilot training.

Luckily for us, instances like this are extremely rare and illustrate how a solitary wasp like a mud dauber, which is basically harmless to humans, indirectly caused an incredible amount of damage and loss of life somewhere else. In this case, it was not the butterfly effect, it was the mud dauber effect.

Most bees and wasps will not sting unless they feel threatened. Unfortunately for us, their perception of an attack on their lives, may just be us accidentally getting too close or vibrating their nest. This can happen by just knocking on a friend’s door or perhaps mowing your lawn.

Although bees and wasps are incredibly important to the environment and our own agricultural needs, when they get inside our homes and businesses, they become a threat to human safety.

Bees and wasps also pose a greater risk to those who are allergic to the venom in a sting. If an allergic person gets stung multiple times, an allergic reaction called anaphylaxis occurs. Anaphylaxis is life threatening, as it causes extreme swelling in the airways resulting in suffocation.

When outside doing yard work, be mindful of your surroundings. Especially if you do not have an expert pest control company like Dave’s Pest Control regularly treating your home.

Bugs like spiders make nests around exterior lighting fixtures because they are attracted to light. Mud daubers make nests close to spider nests because they hunt down and paralyze spiders. Paper wasps make nests under eaves and soffits to stay dry and protected from rain and strong winds.

Wasps and bees can be found pollinating fruits and flowers especially in the early morning hours. By knowing where wasps and bees are likely to make nests, you can avoid unpleasant interactions with them.

Although we sometimes cannot avoid getting stung, having Dave’s Pest Control providing regular service at your home or business will help protect you and your family from a painful experience from a venomous stinging insect.