Flying insects can be quite a nuisance when they get inside our homes. We swat and we swing, missing every time. Effortlessly zipping across the room, we curse their existence. There are many bugs that fly and their evolution has been studied for years.

How do invertebrates defy gravity and lift themselves into the air?

Many of us have dreamed about flying at some point in our lives. We might have imagined we had the power to soar and float high above the ground, flying like an eagle.

Dragonflies, bees, and wasps can fly to incredibly high altitudes. A scientific study found that some bumblebees can fly as high as 29,000 feet. They compensate for reduced air pressure by changing their wings to a more curved shape. This allows the bee to fly in much thinner air, just as many airplane propellers can change the angle of the blades to take a bigger bite of air. Have you ever put your hand out the window of a moving car? You will have noticed that if you curve your hand, it rises in the oncoming air.

Invertebrate fossils date back to the Carboniferous period, about 358 million years ago. During this period, the earth’s land was choked with thick forests and moss. The oxygen levels were much higher than they are today, and invertebrates grew to huge sizes. Dragonflies had two and a half foot wingspans!

Imagine trying to swat one of those away.

“How did you break your hand?”

“Oh, I swatted a dragonfly!”

After millions of years of evolution, insects grew wings and took to the air. Why this happened is much debated, but they did so—and how they did it

—is very much different than what you’d expect.

Insects, birds, bats, and a flying reptile called a pterosaur, each evolved separately. It is widely believed that each developed wings for survival. Having the ability to fly away just when something is about to eat you alive is an incredibly useful means of escape. The amazing ability to fly is an phenomenal trait to have developed for many insects.

From the earliest recorded history of mankind’s desire to fly, comes a story in Greek mythology. In the story, “The Flight of Daedalus and Icarus,” Daedalus made wings out of feathers and wax for Icarus his son and himself to escape from a labyrinth. Before they took off, Daedalus warned Icarus not to fly too low over the sea lest his wings get wet, or too high, lest the sun melt the wax. Icarus arrogantly ignored these instructions and flew too close to the sun. His wings melted, plummeting him to his death. Daedalus mourned his son’s death, naming the land where Icarus was buried Icaria, which is known today as Crete.

While the moral of this story is that arrogance has deadly consequences, it also reveals man’s earliest desire to fly.

In the 15 century, Leonardo Da Vinci dreamed of human flight. He drew sketches of flying machines which included drawings of wings modeled after bat wings. He also designed the first helicopter, calling it an “aerial screw.”

Archimedes, centuries earlier, is credited with inventing the screw—a simple machine—which is, in essence, an inclined plane wrapped around a cylinder. Using this principal in the design of this simple machine, Da Vinci’s concept had the potential to lift a man above the ground, defying gravity.

It wouldn’t be until hundreds of years later in 1903 that the Wright brothers successfully created the first machine allowing man to fly. 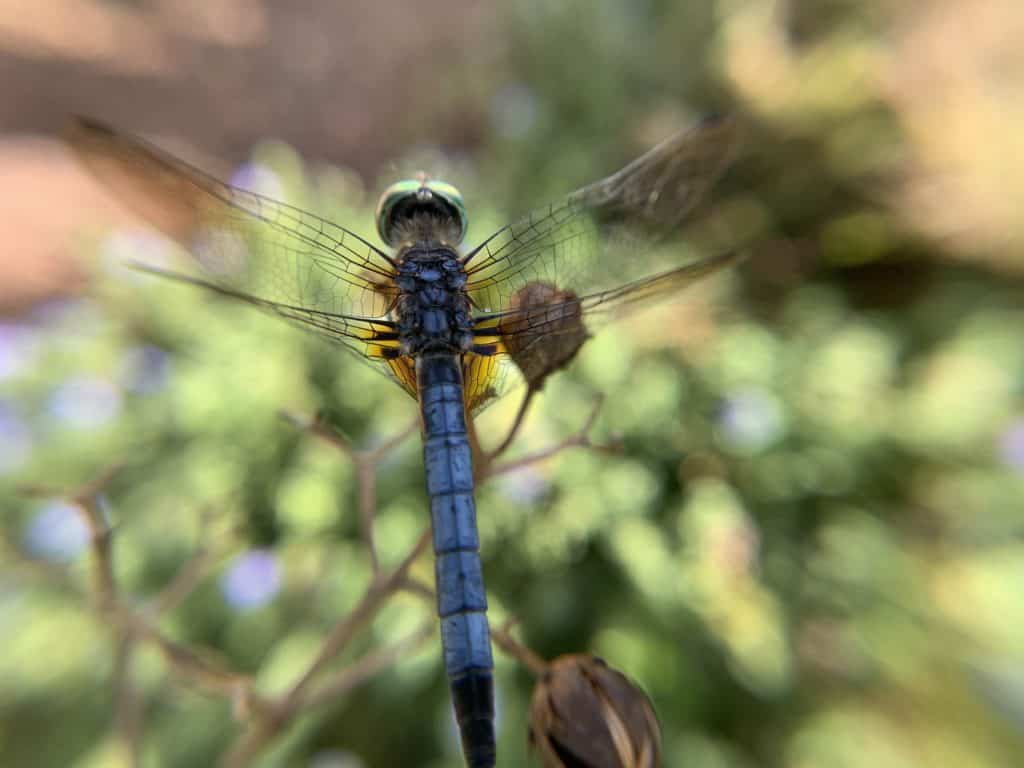 Dragonflies are a common sight in Volusia and Flagler counties. Usually found near bodies of water, dragonflies eat hundreds of mosquitos daily.

Many of these predators can grow to between five and seven inches in length. Flying at speeds sometimes reaching 30 miles per hour, dragonflies are able to avoid being eaten by birds or other prey.

Although dragonflies look big and scary, they have no interest in biting or stinging humans. They may sometimes get stuck inside your screened-in porch, flying erratically, bouncing off the walls trying to get out.

Although dragonflies eat mosquitoes, they can’t completely rid your yard and home of them. Other measures are needed for complete eradication. Dave’s Pest Control provides mosquito control with our non-toxic products that effectively attract and kill all mosquito larvae and adults in an area.

We use In2 care mosquito traps, buckets as they are sometimes called. The effectiveness of the trap is not limited to the trap itself; it extends to the surrounding areas. By using a biological control method, long-lasting results are achieved without using harmful chemicals. 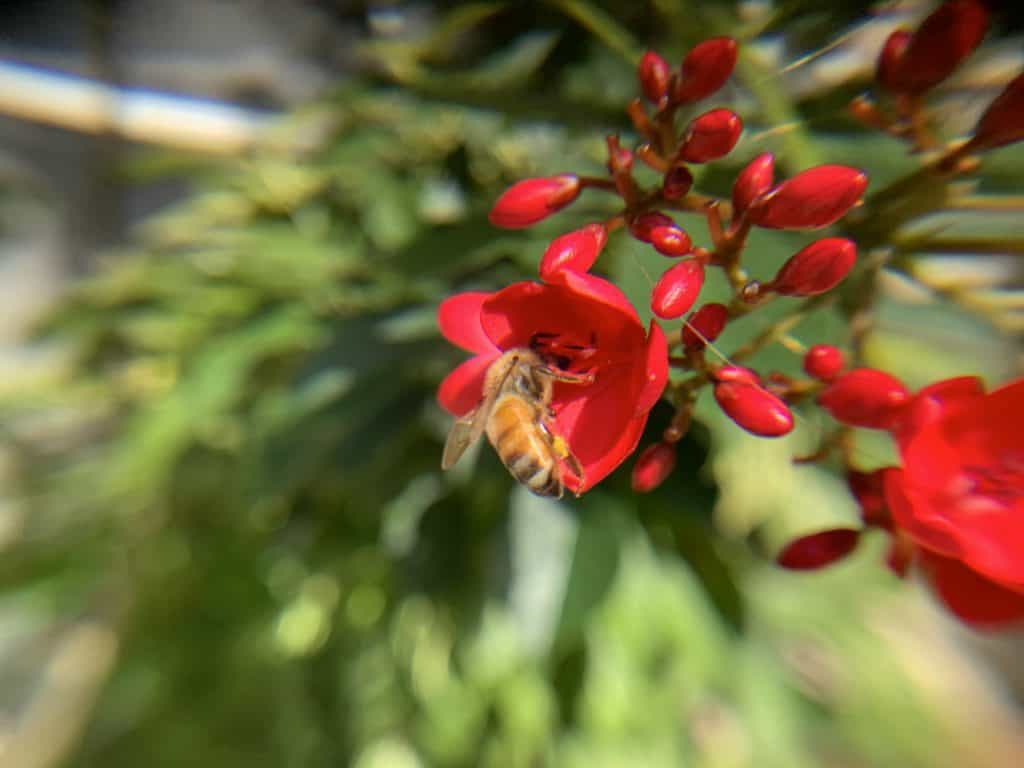 Bees are a very common sight this time of year in Volusia and Flagler counties. During the fall, bees ramp up their activities preparing for the

coming winter. As the temperature drops, and the daylight grows shorter, nectar and pollen dry up. During the months of July through December, bees decrease in colony size. Competition for nectar and pollen grows stronger among all the pollinating insects.

Pollination by insects is called entomophily. The evolution of insects, and the evolution of plants on earth has been interlocked for millions of years.

Plants use the light from the sun for photosynthesis. Green pigment called chlorophyll turns the energy of sunlight into carbon dioxide and water. It is quite amazing how tiny photons from over ninety million miles away are used by living organisms here on earth for nutrients. Insects live and feed on the grasses, plants, and trees abundantly growing on earth.

The European honeybee, apis mellifera, are sometimes mistakenly called wasps or hornets. All of these stinging insects are great pollinators, but there are some differences between them.

Honeybees are fuzzy with yellow and black banding on their bodies. They are not as hostile as wasps and yellow jackets, and only sting if threatened.

They build hexagon shaped cells out of a wax produced in their glands. The cells are filled with honey forming what is called a comb. The honey is made from nectar which bees collect from flowers and plants.

Honeybees communicate by using pheromones and can tell the difference between hive members and intruders.

Bees are extremely important to our planet and its many diverse ecosystems. Over 90 percent of plants and flowers depend on cross pollination to survive. Our planet would look very different today without bees.

of your home or business. In some situations, they can pose an imminent threat to the safety of people and pets. 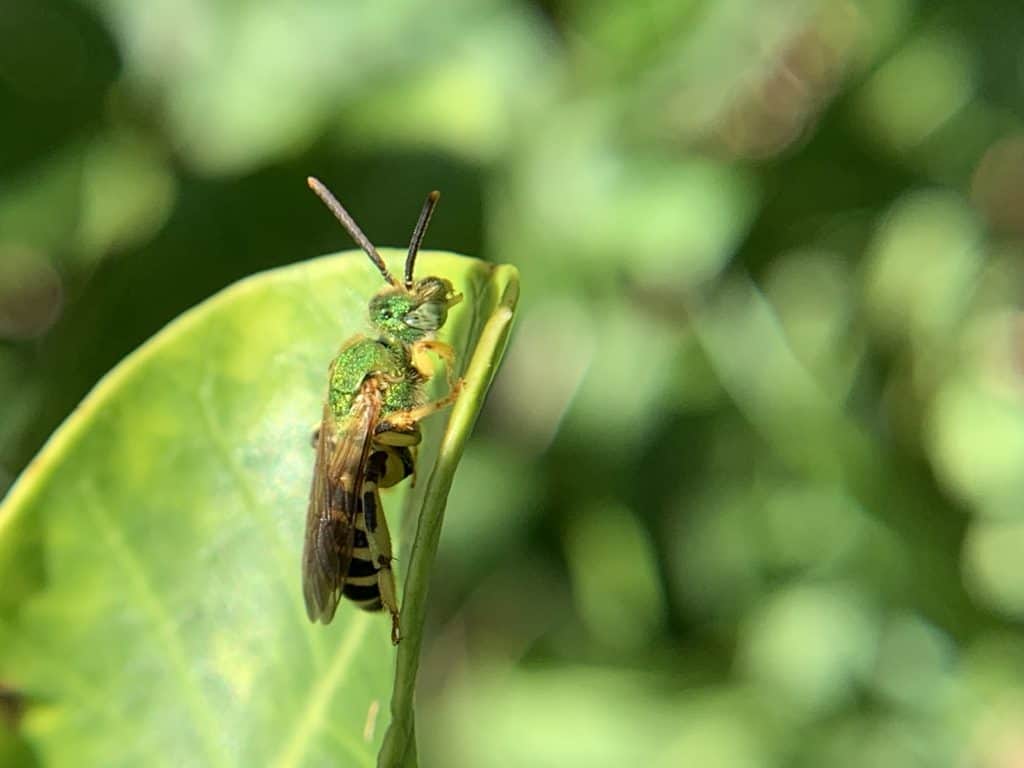 Another commonly seen flying invertebrate is the sweat bee, which is found all over Flagler and Volusia counties. They look like a hybrid between a metallic green fly and a wasp and are important pollinators of many flowers and crops. They zip back and forth erratically pollinating flowers and plants. These bees get their name because they like to lick human sweat. They are attracted to the salt, an essential nutrient in our sweat.

Sweat bees are not aggressive and only sting if threatened. Their sting is described as moderately painful. Generally, they are social insects living in hives either underground, or in hollowed out trees. Many homeowners accidentally run over an underground hive when mowing the grass or pulling weeds in a garden.

When bees take up residence in our living spaces, they become a nuisance and can pose a risk to the health and safety of humans, especially those who are allergic to bee stings. 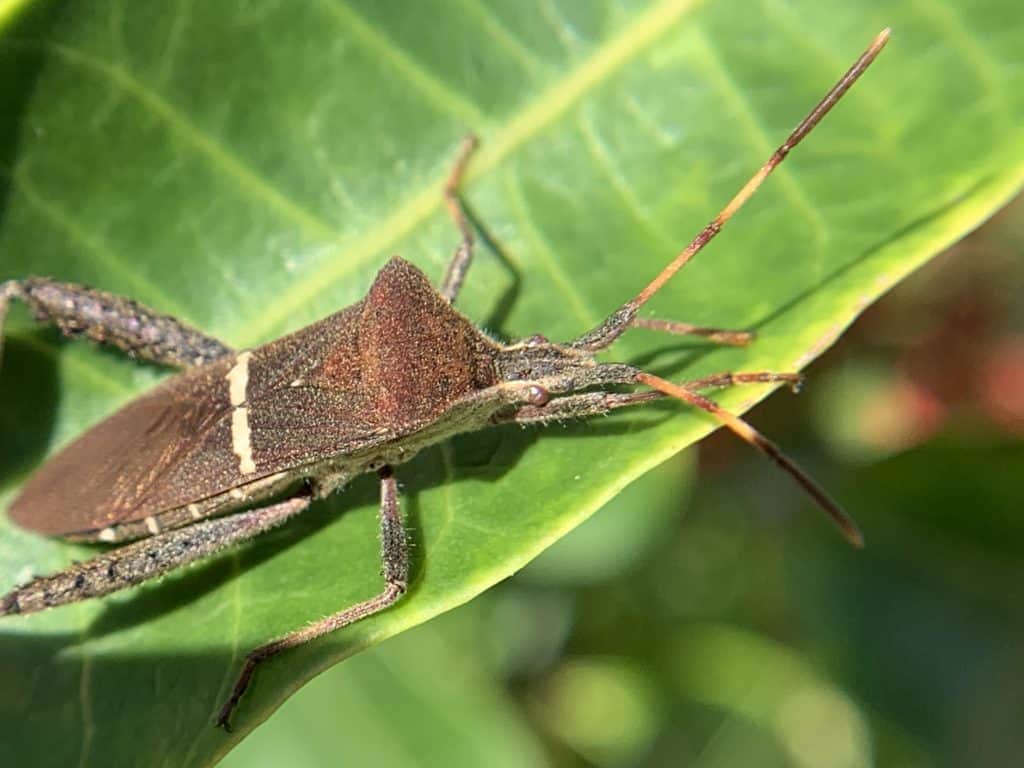 The eastern leaf-footed bug is a slow flying insect that feeds on the sap and plant juices from fruit trees. It is considered a pest to almonds, tomatoes, pistachios, and pomegranates. They inhabit most of the southern United States, Mexico, and Costa Rica.

A common pest from Deland, Deltona and Orange city to Flagler Beach and Palm Coast, leaf bugs can do extensive damage to your prized tomato

plants. These alien-looking pests emit a stink if you pick one up. They are one of many so called “stink bugs” found in Florida year-round.

Flying insects and bugs can intrude on our lives, especially when they get into our homes through open doors and windows. Dave’s Pest Control can eliminate them for you, safely and effectively.