Our state has many kinds of wildlife sharing our living space. Some species can be harmful to our homes and businesses. Raccoons and squirrels can get into attics and crawl spaces, causing costly damage. Insects like bed bugs can invade our beds and inflict a great deal of misery. Incursions from Florida’s wildlife are inevitable. Removing these pests from your home or business is rarely in anyone’s budget. Our experts at Dave’s Pest Control can remove unwelcome wildlife safely and humanely, all at an affordable cost. 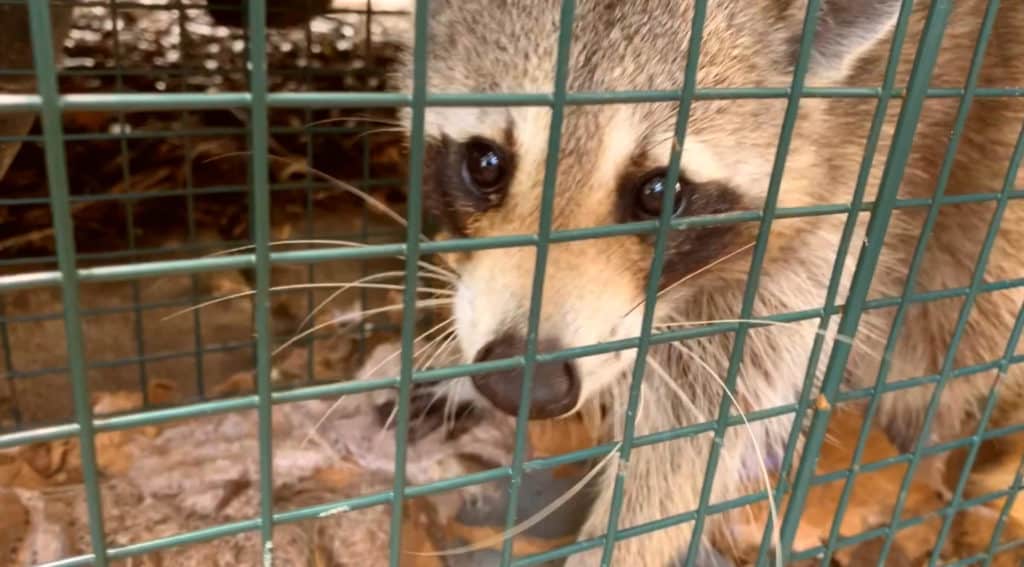 Florida has an abundance of raccoons. These furry bandits live along riverbanks, close to water. Raccoons, like all mammals, cannot survive without water. They live in hidden burrows and forage for food at night. Like thieves in the night, they knock over garbage cans and steal your rotten four-day-old leftover egg salad—a delicious meal for scavenging raccoons.

Raccoons slowly migrated from the south to the north and are found today as far north as Alaska. They are omnivores, eating just about anything, and thrive in cities feeding off the steady supply of garbage that humans produce daily. Dumpster diving raccoons are quite common today, having adapted to living close to our homes and businesses.

They can carry rabies and may attack humans with little provocation. Raccoons, and all wild animals, should be admired and treated with respect, always at a safe distance. While some raccoons may be docile, others will bite if you try to feed or pet them.

Raccoons often break into attics by pushing their way under a home’s soffit. This happens more in the winter than the summer months because, as mammals, they seek a warm and protected environment, especially when nesting. Female raccoons often have two to five babies called kits. Protected in their nests from predators, the kits are about eight to nine weeks old before they venture out to explore their environment.

Armadillos are in a class of animals called Xenarthra, closely related to anteaters and sloths. They are the oldest species of Xenarthra called Cingulata. Xenarthra means strange joints, distinguishing them from all other animals on Earth. This unusual adaptation allows Xenarthra to easily dig and burrow with their front legs, aided by their sharp claws.

Armadillos are believed to have evolved in South America millions of years ago. They have one of the lowest metabolisms of all the mammals on earth. From an evolutionary standpoint, this would be a disadvantage, but armadillos have survived millions of years. They do not need a lot of food to survive. What is not clear, is how they developed shells. While shells are quite common in cold blooded animals, for mammals, it is quite rare.

Nocturnal animals, armadillos forage for food in lawns and landscapes in the cover of darkness all over Flagler and Volusia counties. They feed on grubs and insects in the ground that they dig up with their sharp claws. Female armadillos give birth to four identical pups. They feed on soil dwelling insects like earthworms, grubs, and mole crickets. Armadillos often dig large holes to burrow in and can cause a lot of damage to landscaping.

Every Floridian knows about love bugs, and to know them is to hate them. These insects fly up from the ground to vigorously mate twice a year. They attach themselves to each other and look like some sort of two-headed monster bug, flying and landing on people and objects.

Driving through a cloud of love bugs is like driving through a rainstorm, but instead of rain drops, it’s large black bugs. Loud splats of exploding bugs hit the vehicle and you keep trying to clean the windshield with washer fluid. Large smears of yellow streak across the windshield with each sweep of the wipers’ blades. Thousands of dead bugs are smashed onto the car, covering it with a nasty mess.

The acid from their juices will eat away at the car’s paint if it’s not cleaned off promptly. Large swarms can clog a car’s radiator, causing the engine to overheat. Cleaning love bugs off cars is difficult, especially once the scorching hot summer sun has baked them solid on the car’s surface. Although they only live about three or four days, love bugs are a major nuisance when they are swarming, which lasts about four weeks.

Love bugs are native to Central America. Entomologists agree they most likely migrated to Texas in the 1920’s. Since then, they have plagued the entire Gulf Coast. There are no pesticides currently available to control love bugs. They spend most of their lives as larvae in the ground. They feed on decaying organic matter in the soil and only emerge to mate twice a year.

Some of the myths surrounding love bugs are that they escaped from a lab, or that they were genetically made to eat mosquitoes. These myths are not true. While love bugs are a nuisance, they are harmless to humans and were not created by a botched scientific experiment in some lab. 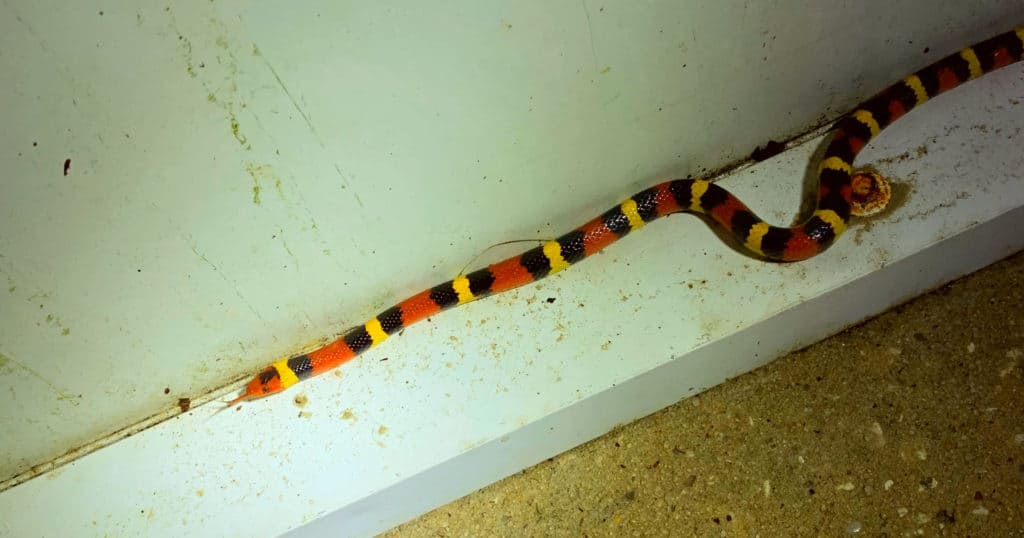 Snakes are another common sight in our state. The warm, wet weather is perfect for these cold-blooded reptiles. Although there are many kinds of snakes in Florida, only a few of them are harmful.

Black Racer snakes are one of the most common snakes seen in urban areas. Fortunately, they are harmless and will quickly slither away if cornered. Juvenile black racers are light grey with maroon and black spots. Racers feed on animals like rats, so having them around your home or garden is beneficial. They often surprise homeowners by quietly slithering under their feet when they least expect it.

Rat snakes, or corn snakes, are also quite common in Florida. They can be seen along coastal towns like Flagler Beach and New Smyrna Beach. Corn snakes have markings on them that look like ears of corn, giving them their name. These snakes stay away from people and are only interested in finding a meal like a mouse or a rat. Occasionally, they get into homes through an open door or window. Rat snakes are not aggressive, nor are they poisonous. They kill their prey by constricting and suffocating it.

Scarlet king snakes are often mistaken for the venomous coral snake. Scarlet king snakes have a ring pattern of red, black, and white and are not venomous or dangerous to humans. They feed on small lizards and other small invertebrates. There is a rhyme that goes “If red touches black, friend of Jack. If red touches yellow, kill a fellow.” Although somewhat helpful, this rhyme is not the best way to identify a snake. The rhyme can be confusing and may mislead to an incorrect identification. King snakes should be relocated if caught. Killing them because of an incorrect identification depletes a beneficial part of our fragile ecosystem.

Dave’s Pest Control can accurately identify many of the common snakes often found in our backyards.

Bats can be a nuisance when they roost in an attic. They excrete guano, which is fecal matter made up of thousands of digested mosquitoes. Guano is highly dangerous and filled with bacteria that can make you sick.

Bats are the only mammals that can fly. Their precision flying can outmaneuver birds, and their wings create more lift than a bird’s wings can. They use echolocation, just as dolphins do, to find food. They do this by sending and receiving sound waves that bounce off objects.

In the Middle Ages, bats were considered evil, so much so, that it was forbidden to eat bats as this was perceived as eating Satan himself. Bats were demonized and to be avoided at all costs. Satan and demons have long been depicted with bat-like wings.

In the late fifteenth century, Leonardo da Vinci searched for ways to enable man to fly. He studied birds and bats, and made many sketches of bat wings. Leonardo said if a man wanted to fly, he must create wings like that of a bat.

Today, bat colonies take up residence in our homes and businesses. In Florida, bats are protected and cannot be evicted during maternity season, April 15 through August 15. Exclusionary work for bat colonies must be completed before their maternity season starts. Exclusion of bats is accomplished by hanging a back screen over the place where they exit their roost at dusk. Special “bat cones” are also installed. Together the cones and the screen allow the bats to leave the roost as they normally do, but stops them from getting back inside when they return. The bats eventually give up and fly elsewhere.

Squirrels are found on almost every continent on earth. Along with humans, squirrels occupy every square mile of land. If you look out your window on any given day, you will probably see a squirrel or two scampering across the yard or jumping from tree to tree. Our urban areas are the perfect habitat for them.

Keeping them out of our living space is an ongoing struggle. Like little furry ninjas, they often break into attics to nest and give birth. Once inside, they are difficult to trap. Getting them out is challenging since squirrels are so fast and erratic. Squirrels are highly suspicious of traps. They shy away from traps with nuts as bait since they usually have a steady food source from the trees and shrubs nearby. They greedily raid bird feeders for a quick meal.

Dave’s Pest Control offers affordable wildlife removal for your home or business. Whether it’s Rocky Raccoon or ninja squirrels jumping from the rafters in your attic, we will safely trap and relocate them to a new home.

Call us today for a free estimate.