Bugs that feed on decaying organic matter are called Detritivores. Some of the most common of these insects are maggots, earthworms, termites, millipedes, and pill bugs. Our planet is dependent on these bugs to break down the organic components contained within them. This constant recycling of plants is the reason soils become fertile and rich in nutrients. 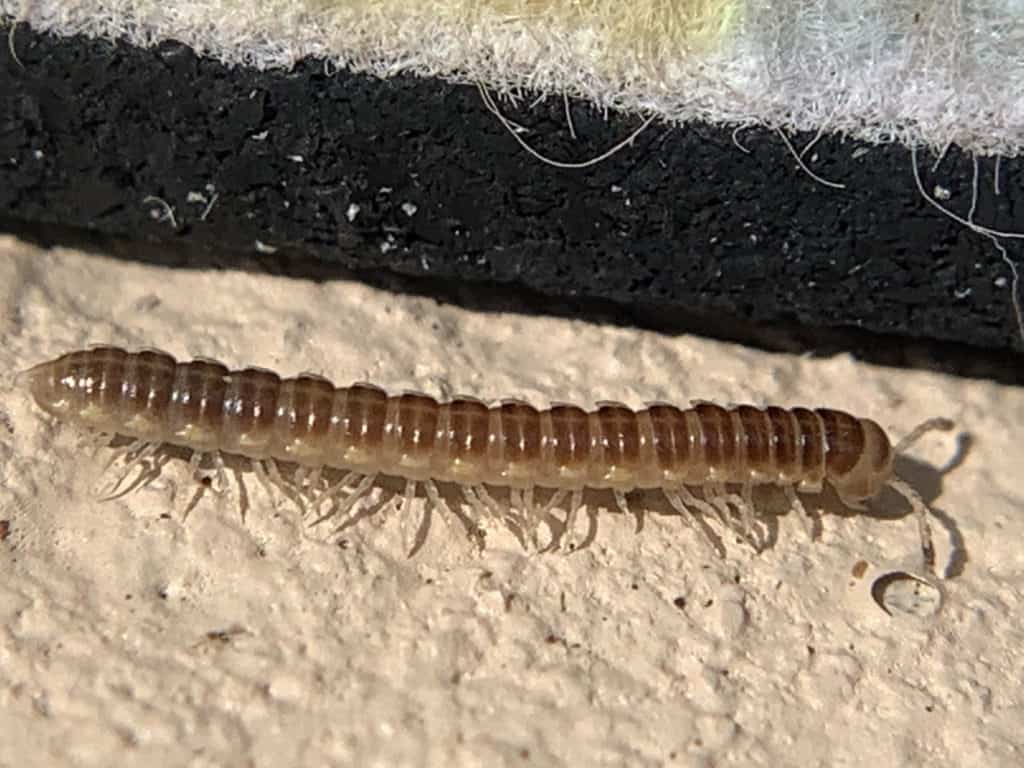 Millipedes are common in Volusia and Flagler Counties. They are found in large numbers clinging to exterior brick and stucco walls. There are over 10,000 species of millipedes in the world and none of them are harmful to humans, unlike some species of centipedes that are venomous.

Millipedes grow in segments. Each time they molt, a new segment is added with a pair of legs. Most millipedes have between 80 and 100 legs. They consume decaying organic matter like rotting leaves and other plant matter, and can be found under rocks, logs, and other areas high in moisture. 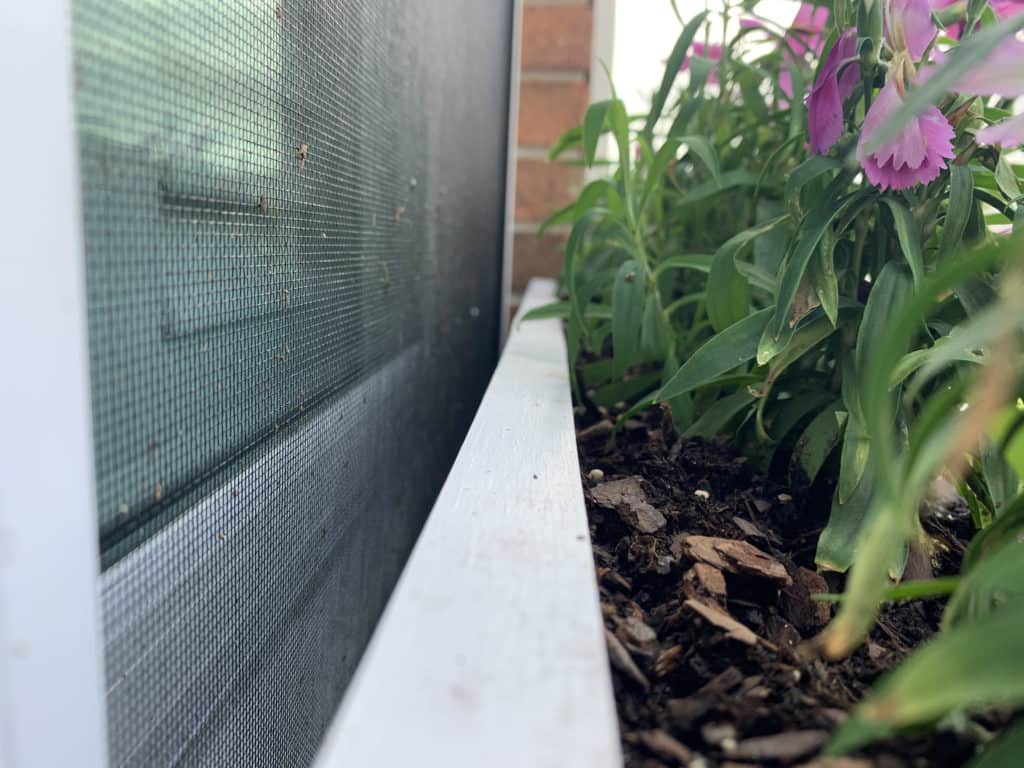 Mulch can harbor millipedes in the thousands. We once had a customer who installed mulch all around his home, and sometime later, found thousands of millipedes coming up from the ground and spreading all over the home’s exterior stucco. That multitude resembled a horror movie with thousands of crawling bugs covering the walls, doors, and windows of the home.

Like millipedes, centipedes are found in wet or moist environments. The name centipede means having 100 legs, but most have fewer than 70. Baby house centipedes have only eight legs and grow more with each molt. After they molt, centipedes often eat the exoskeleton they have just shed for a quick meal.

Centipedes move very fast, propelling their many legs in a synchronized wave motion. This is analogous to a rowing team paddling their boat through the water.

The most common centipede we find is the house centipede. They are often found in bathroom sinks or tubs searching for water. House centipedes have about 60 legs and can scare the daylights out of someone suddenly coming upon one.

Centipedes rarely bite people. They use their venom to paralyze prey such as spiders and flies. The house centipede uses the tips of its legs in an incredible way; their legs are segmented so that they can wrap the tips around prey like a lasso, making escape futile.

The house centipede has what is called automimicry. This is when one part of an animal can mimic another part of its body. Centipedes have long antennae on their rear section that closely resembles the antennae on their heads. Snakes also use this defense mechanism in which their tails look just like their heads.

Automimicry can fool a predator into thinking it is attacking the head, when in fact, it’s the rear end. The centipede has the advantage over prey by this mimicry. 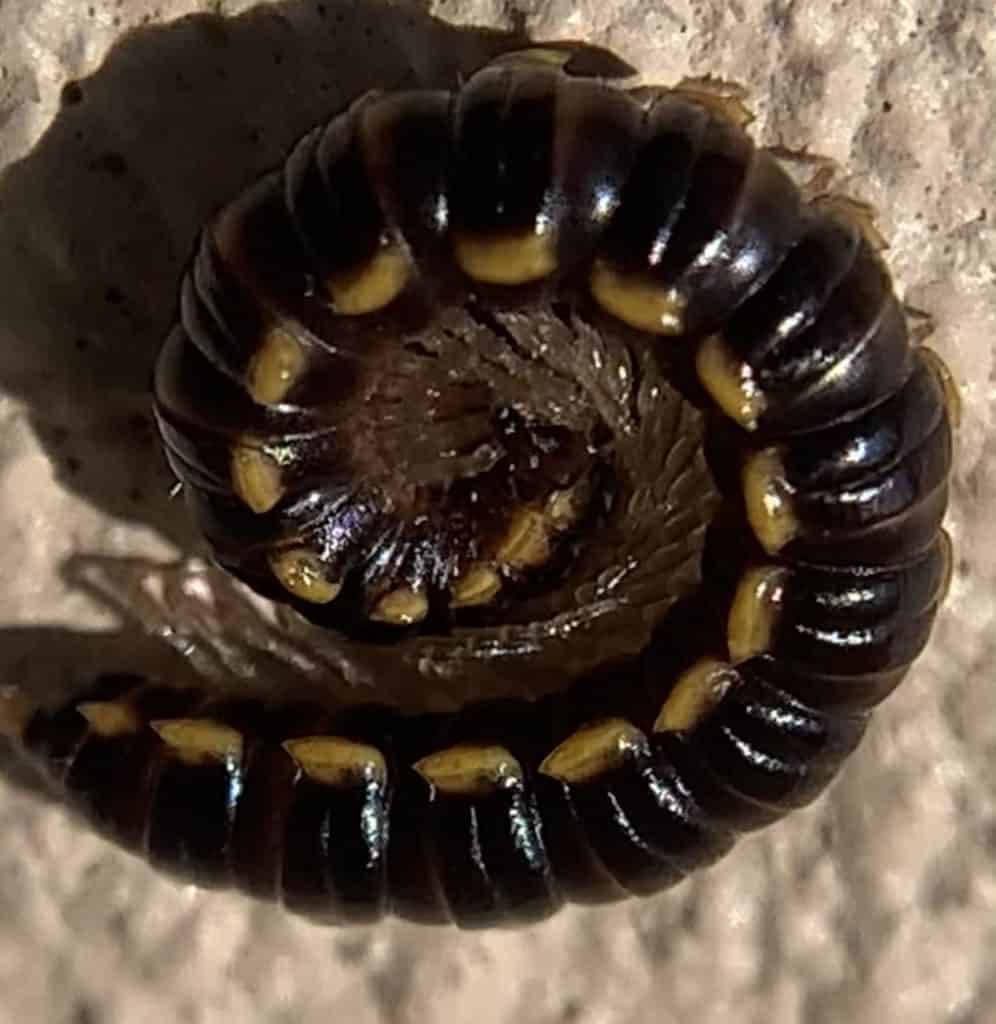 There are over 3000 species of centipedes, most of them harmless to humans, except for one; the giant desert centipede, which is the absolute worst one to get bitten by.

The giant desert centipede is over 11 inches long and packs a potent venom made up of many toxins that instantaneously disrupt the cardiovascular muscular and nervous systems of its prey. This is one bug you do not want to ever get bitten by. The giant desert centipede can immobilize prey much larger than itself. It is comparable to a human biting a hippopotamus and the hippo instantly becoming paralyzed.

Unlike snakes and scorpions, the centipede’s venom toxicity is uniform across many species. The larger the centipede, the more venom it injects through its forcipules. The forcipules are modified legs located right behind their legs that pinch and grab prey while injecting venom through its sharp fangs.

The bite of a giant desert centipede is extremely painful and can be lethal. Necrosis (the dying of skin cells) occurs around the puncture wounds. Anaphylaxis, which is a severe allergic reaction, can also develop after one has been bitten.

Fortunately for us on Florida’s east coast, there aren’t any giant desert centipedes to fear. However, we still have other bugs that are just as dangerous and should be recognized.

Most pet owners have had to deal with fleas. These resilient pests feed on blood and have been responsible for some of the deadliest plagues in history.

Fleas can jump over eight inches, which is over 150 times their height. Experiments have shown that if humans could jump as high fleas do, we’d make it to the top of the Empire State Building in New York City.

When flea populations grow out of control, they jump on our legs, arms, and any other exposed areas of skin. Fleas consume blood by injecting a needle like appendage into the skin which acts like a straw. Allergic reactions from the bites often occur and show up as red, itchy, swollen bumps on your body.

Fleas can be hard to get rid of. They can rapidly get out of control when populations become very large, very quickly. Fleas can reach adulthood and start feeding on blood 21 days after hatching from their eggs. Fleas will develop from egg stage to larva stage in about 3 to 14 days.

Fleas go through a complete metamorphosis. The stages, or life cycle, are egg, larva, pupa, and adult. Fleas are not host specific; they feed on the blood of many different animals including cats, dogs, rats, racoons, and humans.

Fleas not only can infest the interior of your home including carpets, bedding, furniture. and rugs, but also can be found in mulch beds, turf grasses, and dirt.

Fleas are a common problem in homes where people have pets. We have had customers whose pet picked up fleas from just going on a walk. The fleas hitchhike back to the home where they fall off the animal and into carpeting, rugs, furniture, and floors.

Fleas can cause a host of serious medical problems including anemia and allergic reactions to the bites. Cats that have fleas will lick and consume fleas and their eggs, causing worms.

If you think you have fleas in your home, you can do the white sock test. Put on a pair of white socks and pull them all the way up toward your knees. If they’re present, the dark brown fleas will jump up onto your white socks where they are easily seen.

To treat fleas, we use a pesticide specifically labeled to kill fleas plus an added insect growth regulator to stop the fleas from laying eggs. Fleas can lay up to 50 eggs per day! That’s 1,500 fleas in one month!

Most often several applications are needed to control fleas because pesticides do not penetrate the eggs, making it very difficult to kill the eggs.

When organic matter such as a dead animal decays, flies are the usually the first bug to land and lay eggs on the carcass. 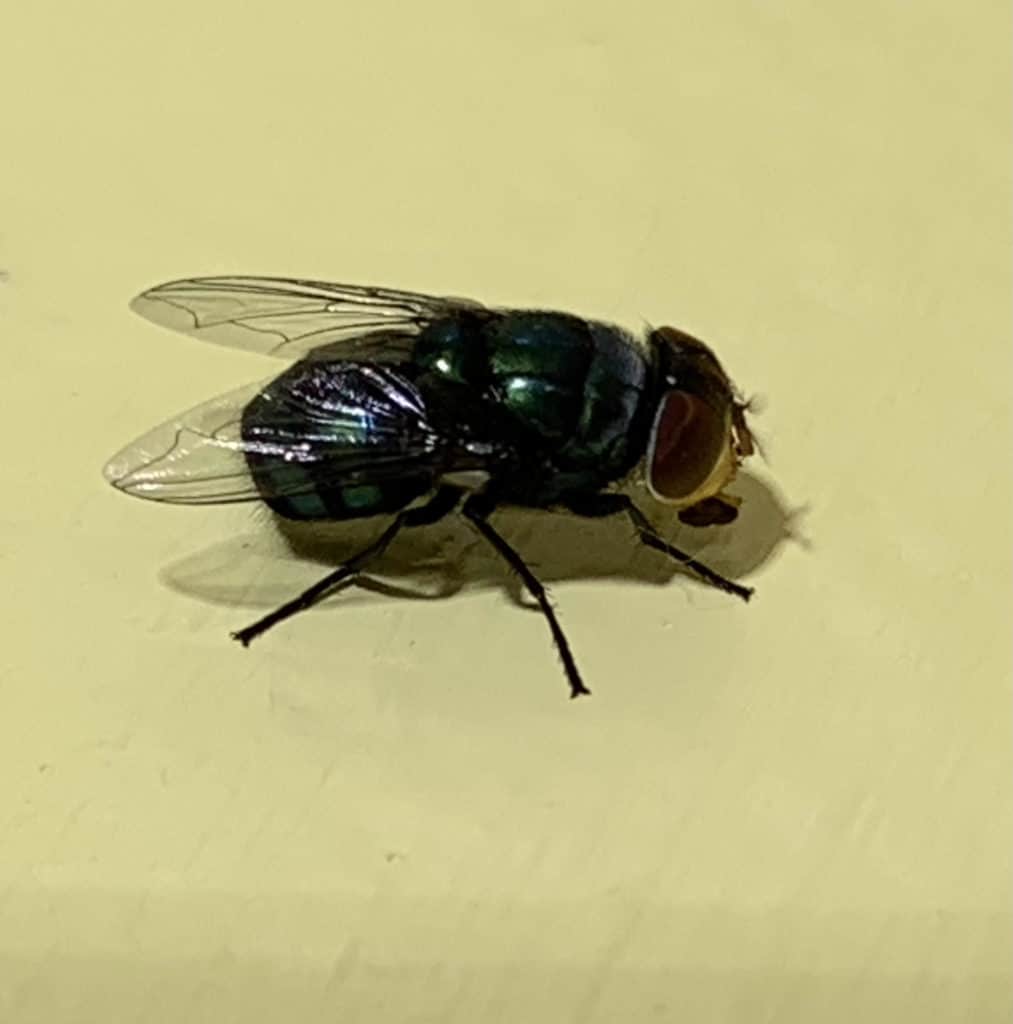 The fly eggs hatch into larvae called maggots. Maggots consume the decaying organic matter contained in the carcass. Flies can sense a decaying animal from hundreds of feet away.

Pill bugs, also called woodlice, infest decaying plant matter and decaying wood fibers. They have the unique ability to form themselves into a ball when they feel threatened. This defense mechanism is shared by millipedes. Just a small amount of vibration or pressure is enough to stimulate a pill bug to roll up into a ball. 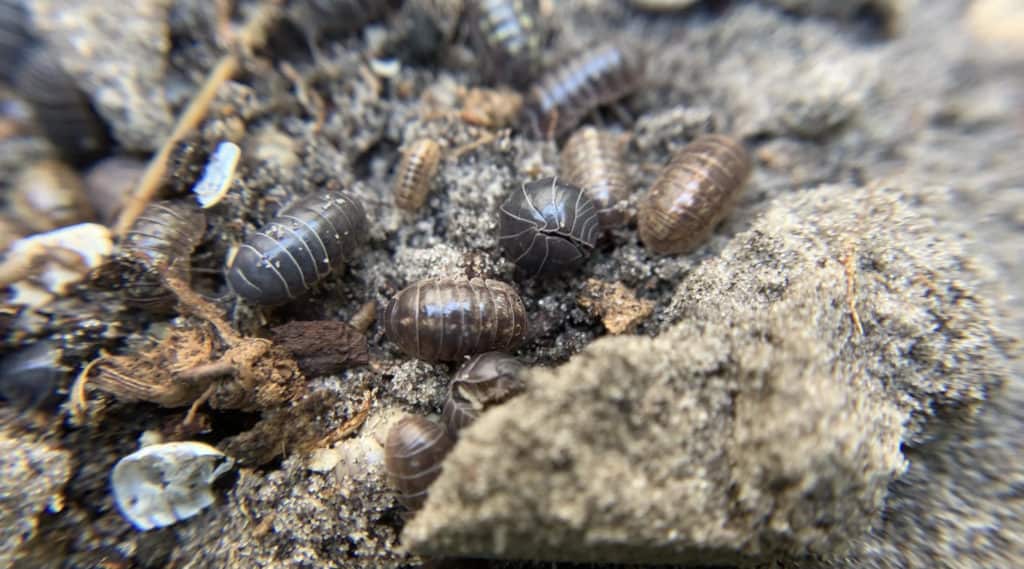 Pill bugs consume live plants and thus are a major pest in the agricultural industry. Some species of pill bugs will even eat the decaying flesh of animals, snake skins, and other dead bugs. They are most often found in areas that are constantly wet and containing an abundance of decomposing organic matter. Pill bugs facilitate decomposition and can even remove toxic metals from the soil. 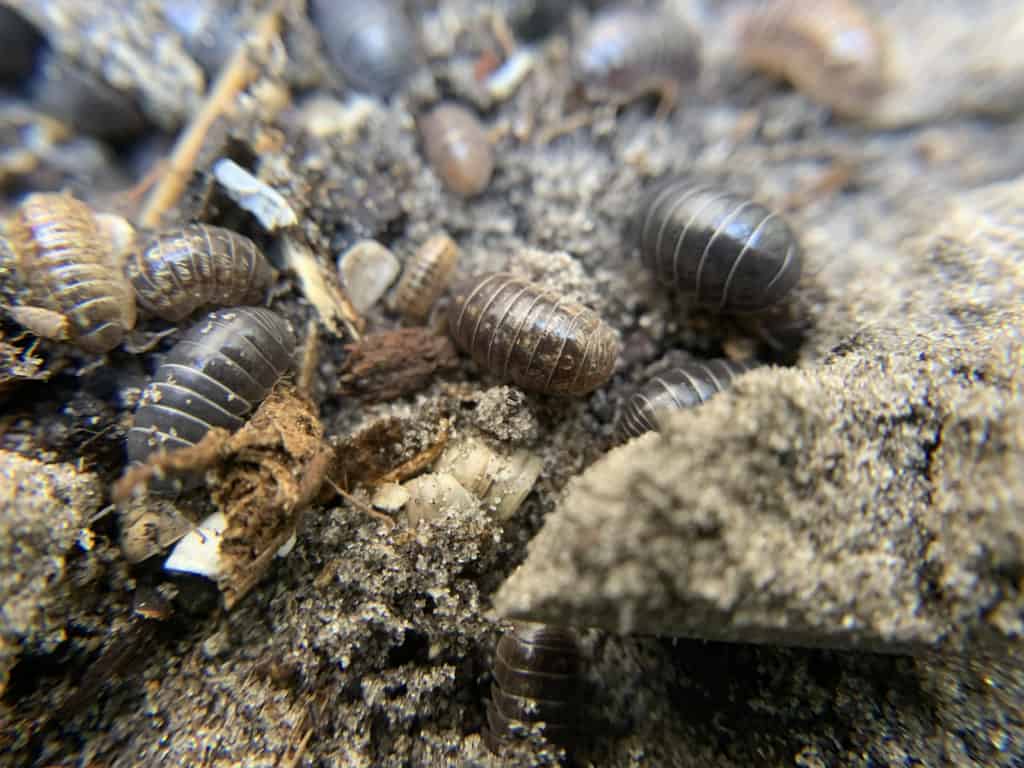 If you see large populations of pill bugs in your home, there may exist a larger issue of damaging moisture generating the pill bug problem. Homes with moisture problems also attract roaches, termites, ants, and other invasive bugs.

Silverfish are a common pest problem in homes and businesses. They eat and consume paper such as the back of insulation, books, magazines, paper, and any other material containing cellulose. When silverfish are in the attic, damage can go unnoticed for years. To help control silverfish in attics as well as other pests like spiders, roaches, and ants, an attic dusting will do the job of exterminating the bugs.

An attic dusting is the use of a machine to blow an insecticide into the attic. The insecticide’s formulation looks like baby powder. After being blown into an attic, the powdery dust slowly settles and remains active for long periods of time making re-applications each year unnecessary.

Bugs are an important part of our world, helping to recycle life on our planet, but they do not need to live inside our homes. For thousands of years, people had to sleep without knowing what creepy insects may be crawling into bed with them. Today, scientific advancements keep us safe from pests like fleas, silverfish, cockroaches, spiders, and ants.

Call Dave’s Pest Control for a free consultation with one of our experts.