Aphids, Boxelder bugs and Bed bugs….what you need to know.

Every avid gardener knows about aphids and often does battle with them. These tiny bugs feed on many garden plants and flowers. Aphids are soft bodied bugs that suck nutrient rich sap from the leaves, stems, and buds of many kinds of plants. 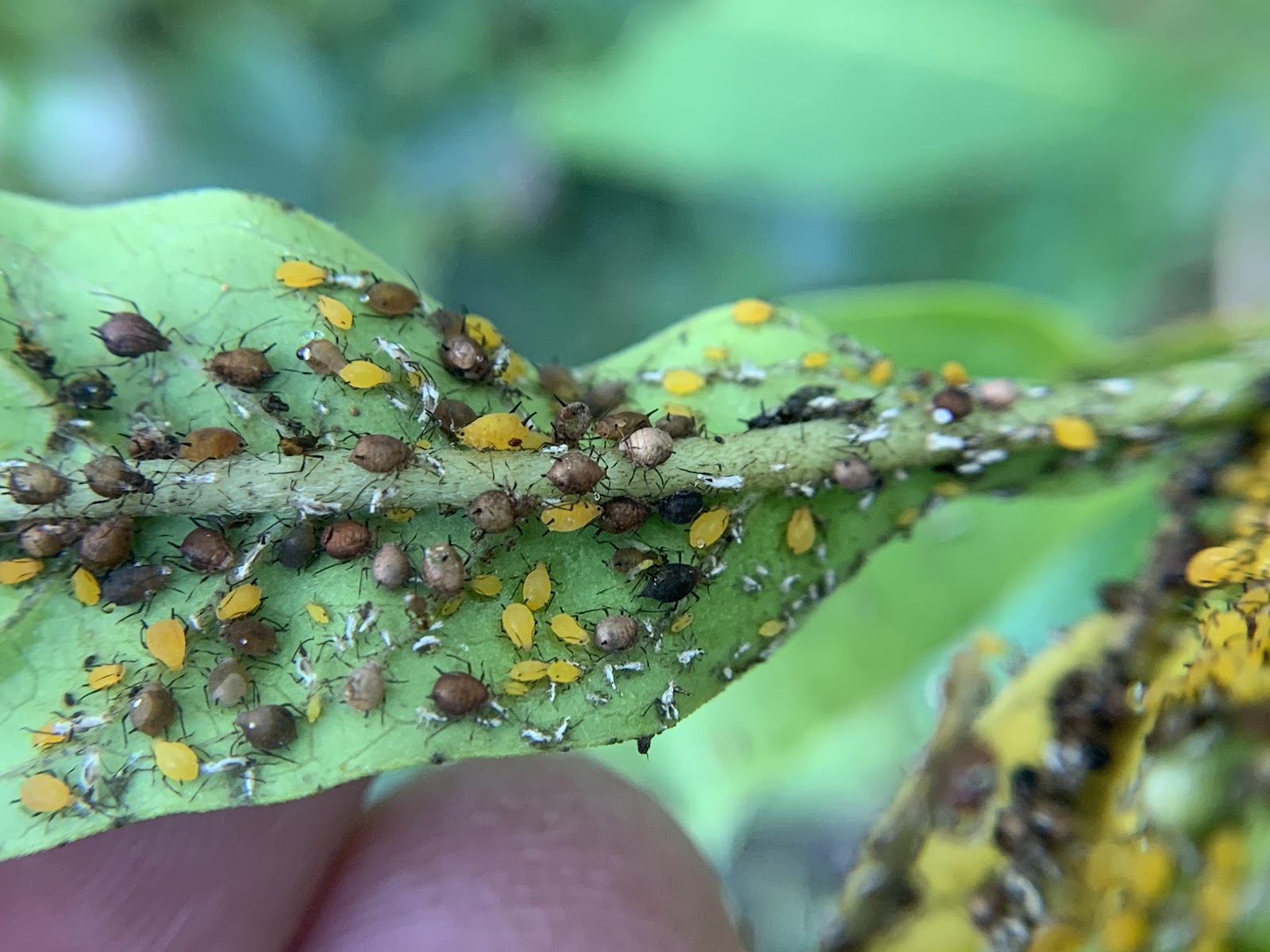 Astonishingly, they have a great amount of reproductive power, but not in a way familiar to us. Virgin female aphids can produce genetically identical female aphids—clones—about every 20 minutes. Even the newborn aphids have a smaller aphid inside them ready to be born.

To further their fight for survival, roughly half of the clones sprout wings. Being airborne gives them an added advantage for survival. By spreading out to neighboring plants, they increase their food supply, and their numbers will grow exponentially.

By producing a genetic variety of different DNA codes, aphids have been able to survive for thousands of years. It also has enabled them to survive throughout Earth’s environmental changes.

Many other bugs feed on aphids such as ladybugs, lacewings, and certain beetles; thus, you are most likely to find a large number and variety of bugs in your garden all at one time. 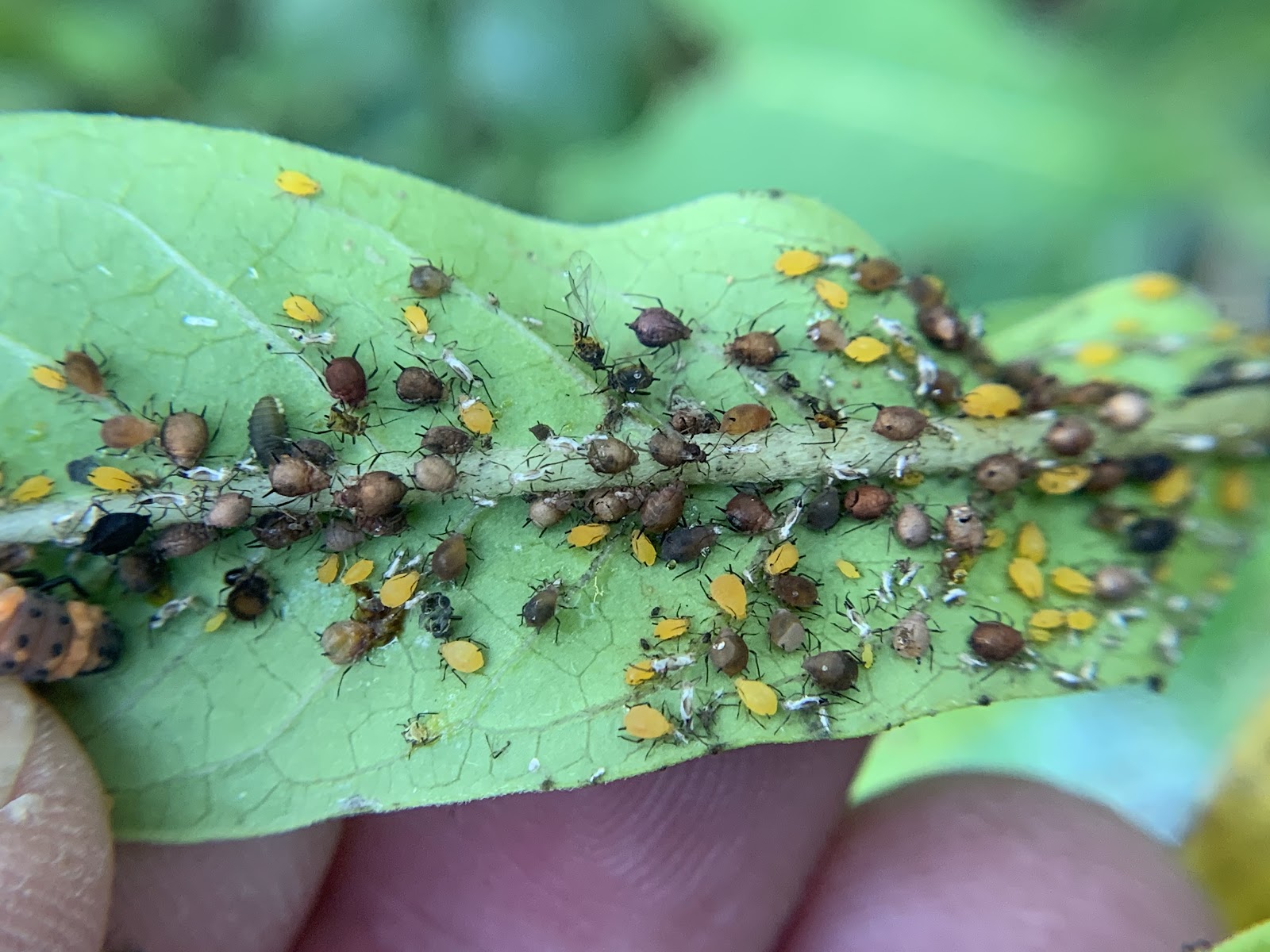 There are many different species of aphids; they come in many different colors and sizes. When the males mate with the green females, orange color aphid babies are born.

Aphids suck the life out of plants. Without the vital nutrients for healthy growth, plants desiccate and die. Aphids excrete a sticky substance called honeydew, which in turn creates sooty molds that feed on nutrients from the honeydew. 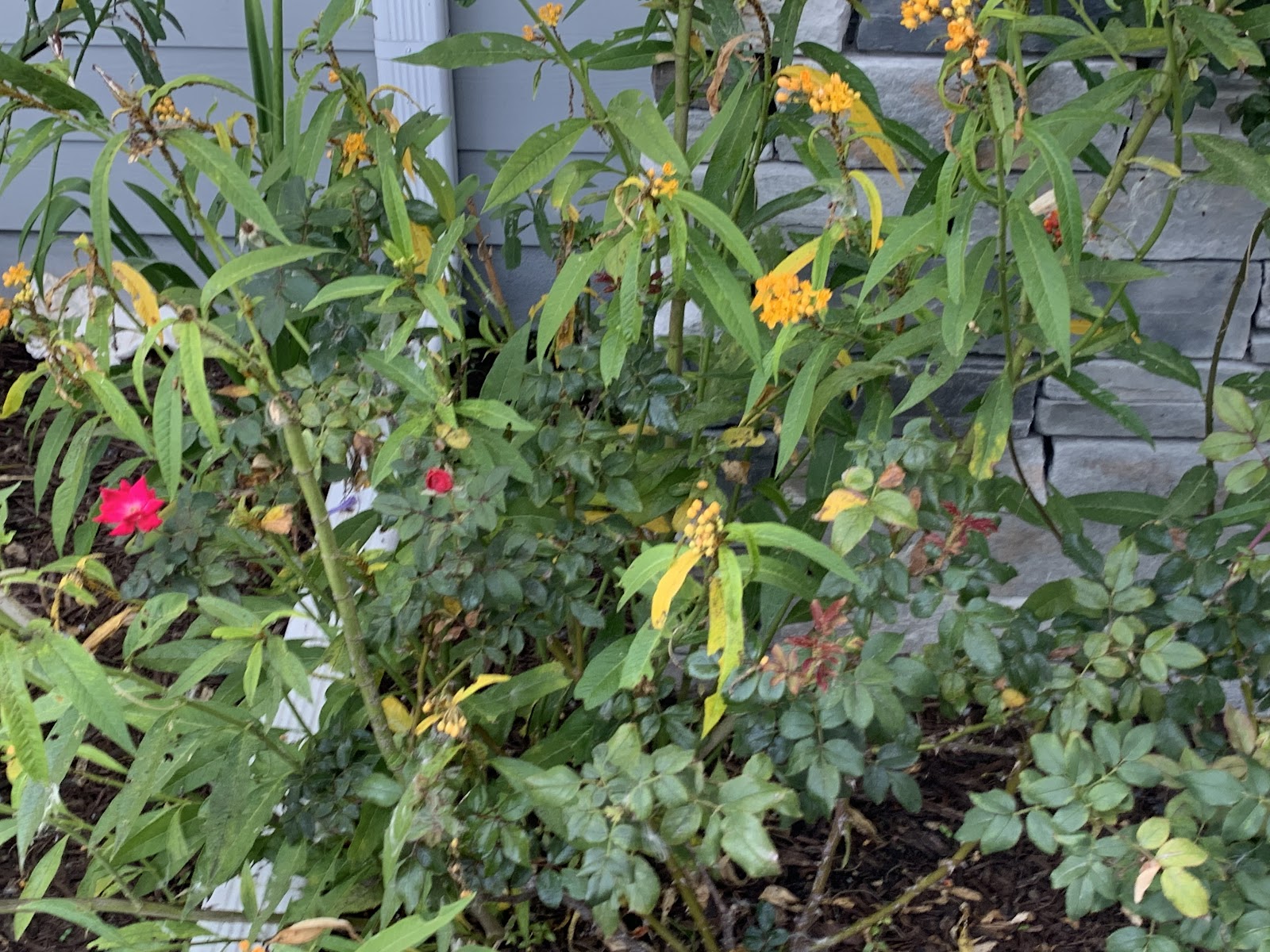 The sooty molds are fungi spores that coat many ornamental plants that aphids feed on. The presence of black sooty mold does little harm to the plants, but it is a good indication that insects are feeding on them. 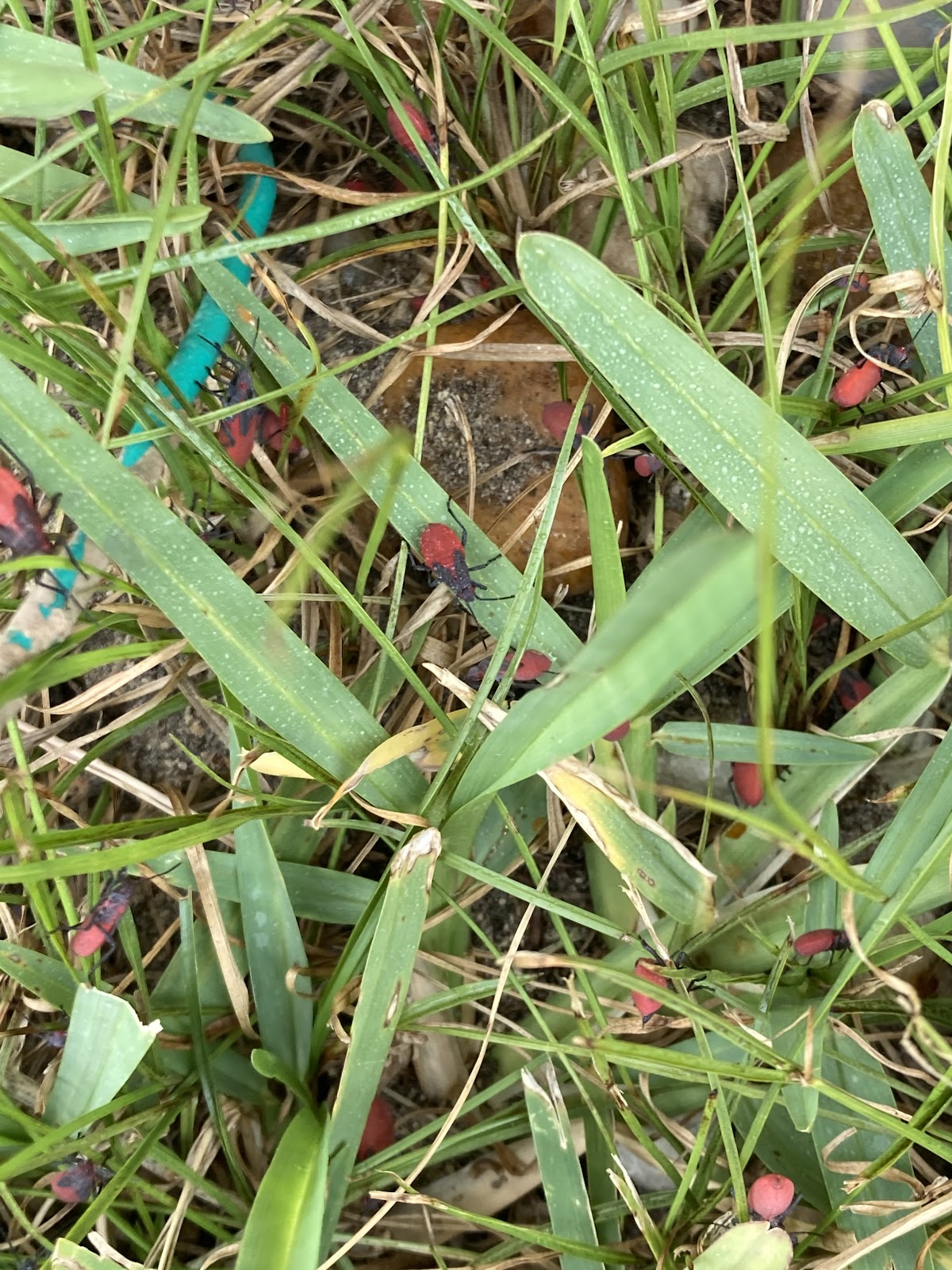 These tiny red bugs called boxelder bugs are native to the United States. Without fail, they swarm every spring in Volusia and Flagler Counties. They get their name from the boxelder trees they feed on, although they also feed on other types of trees and landscape plants.

When cooler temperatures arrive in the fall, they can overwinter indoors after finding small cracks and crevices to nest in.

Adult boxelder bugs are about a half inch long with very distinct red, orange. and black markings on their bodies. 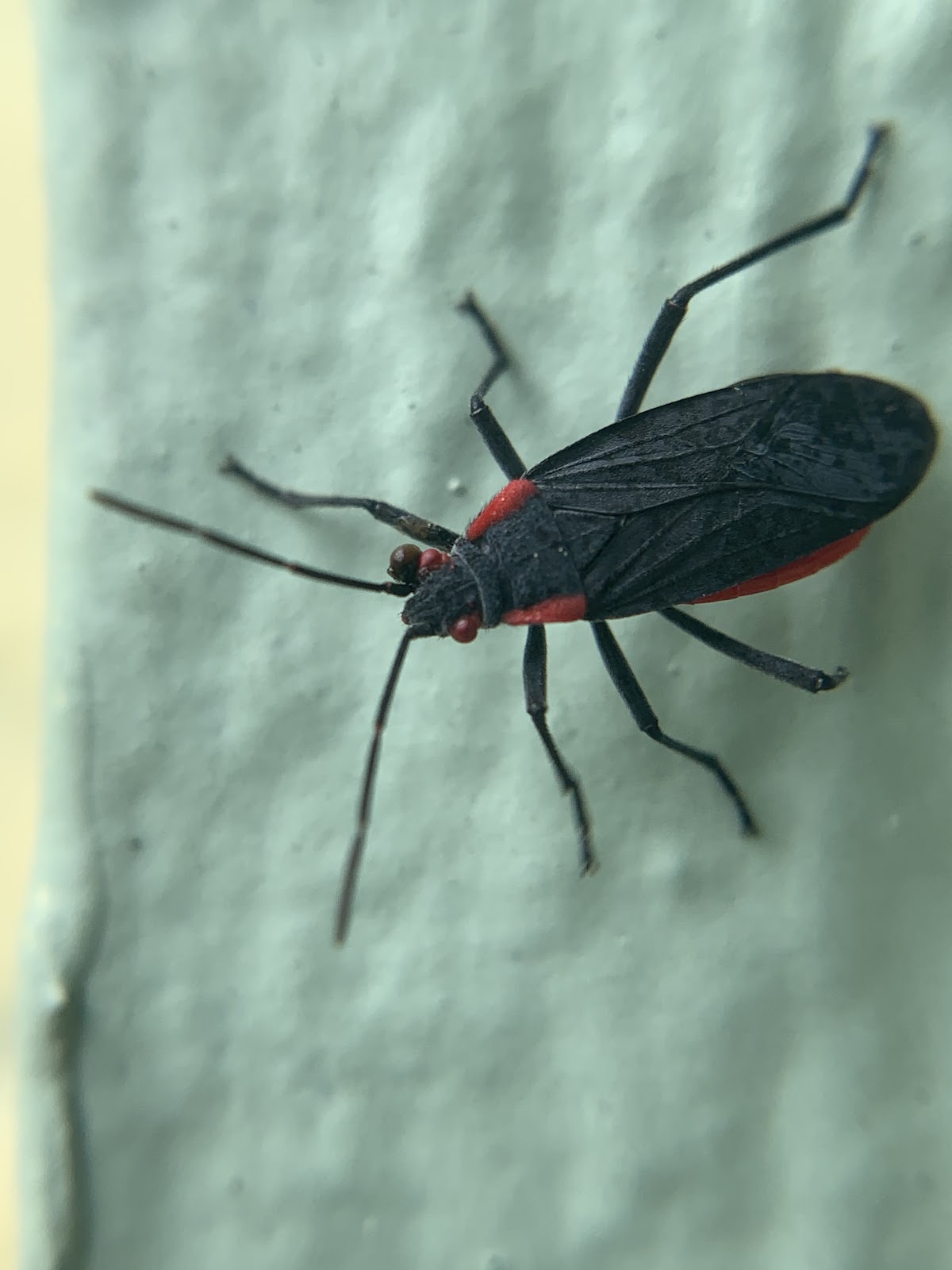 This one in particular has a small mollusk attached to its face.

Controlling boxelder bugs can be difficult, especially if large clusters are accumulating on the sides of your home or place of business. You can find the majority of boxelders in large clusters on the warm sunny side of structures, including windows.

The first line of defense to keep any bugs out, not just boxelders, is to make sure windows and doors do not have any large gaps or openings, especially at the bottom door sweeps, and around the structure’s foundation.

Boxelders have three life stages: egg, nymph, and adults. The nymphs are small and red, lacking the familiar dark black wings. As the nymphs grow, they eventually become mostly black and develop wings for flight.

Boxelder bugs gather in very large populations and may look intimidating.  However, they are harmless to humans and pets.

Sometimes they are referred to as stink bugs. If you find yourself in a situation where boxelders are crawling inside your home or business, resist the temptation to smash them. They give off a putrid smell—hence, stink bug—and their guts can stain carpets, flooring, and furniture.

Rather than smashing them, it is recommended that you vacuum up boxelder bugs and dispose of them. Or if you have a vacuum bag, once it’s full of the bugs, freeze it overnight. The bugs will die in the freezer and you then can dispose of the bag.

A very popular home remedy for getting rid of boxelder bugs is to spray them with a small amount of dishwashing liquid mixed with warm water. This will cause the waxy layer on their exoskeleton to desiccate, leading to their death. This is a great way to spray for these bugs without using pesticides. One drawback is there will be no residual control from the spray, so you will have to reapply often. 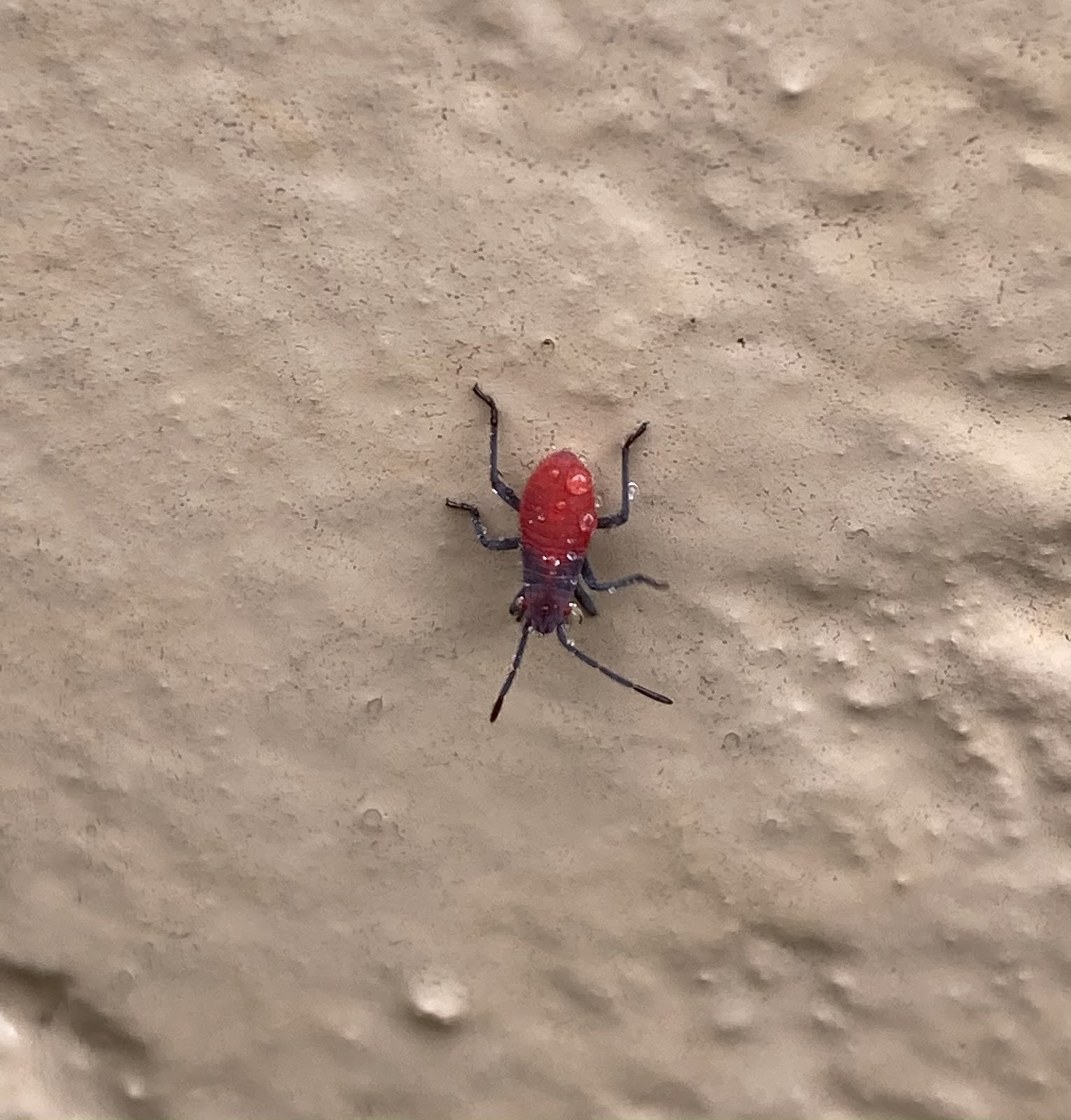 Chemical barrier sprays are also a great way to control boxelders. When applied correctly and in the right areas, large populations of boxelders can be eliminated quickly.

Boxelder bugs are also found in great numbers on a variety of trees such as maple and ash in addition to boxelders These all can be sprayed with the dishwashing liquid and water mixture without harming the tree. If using a chemical spray on trees, make sure you strictly follow all the labeling directions. Some insecticides can wipe out beneficial insects that are needed for healthy growth of the trees or plants. Furthermore, some insecticides can chemically burn the leaves of a tree. Although the tree would not die from this, it would be put in great distress.

You could also remove any trees that accumulate boxelders, but that would be an extreme measure, and even if you did that, many boxelders would still be present in the ground.

Fortunately, boxelder bugs only appear in the spring and fall. We rarely see them during the summer months. As far as bugs are concerned, these bugs do not do damage to our homes nor do they feed on people or pets. Boxelder bugs are merely a nuisance pest and are rarely a problematic issue. 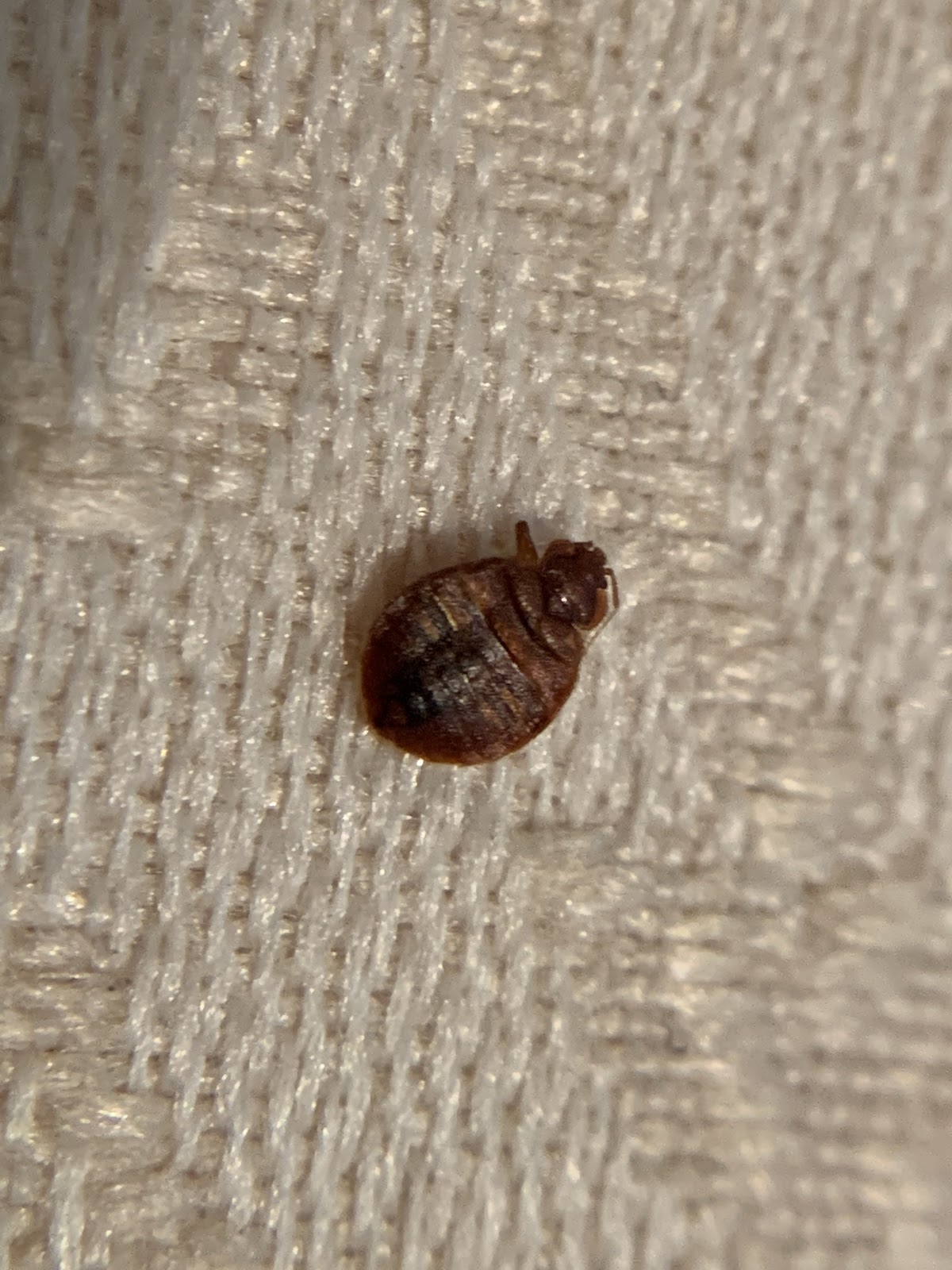 Say these two little words aloud to anyone within hearing distance and watch them shake in disgust. Nothing else quite induces the fear and revulsion produced by the mere mention of these bugs feeding on your body while you are sleeping.

Bed bugs nymphs are very small and clear, reaching about 1/16 of an inch long. The adults are about a quarter of an inch long, resemble an apple seed and are about the same size. Their minute size and stealthy disposition make them a worthy adversary. They came into our ancestors’ lives, have clung on to us, and we’ve never been able to eradicate them. 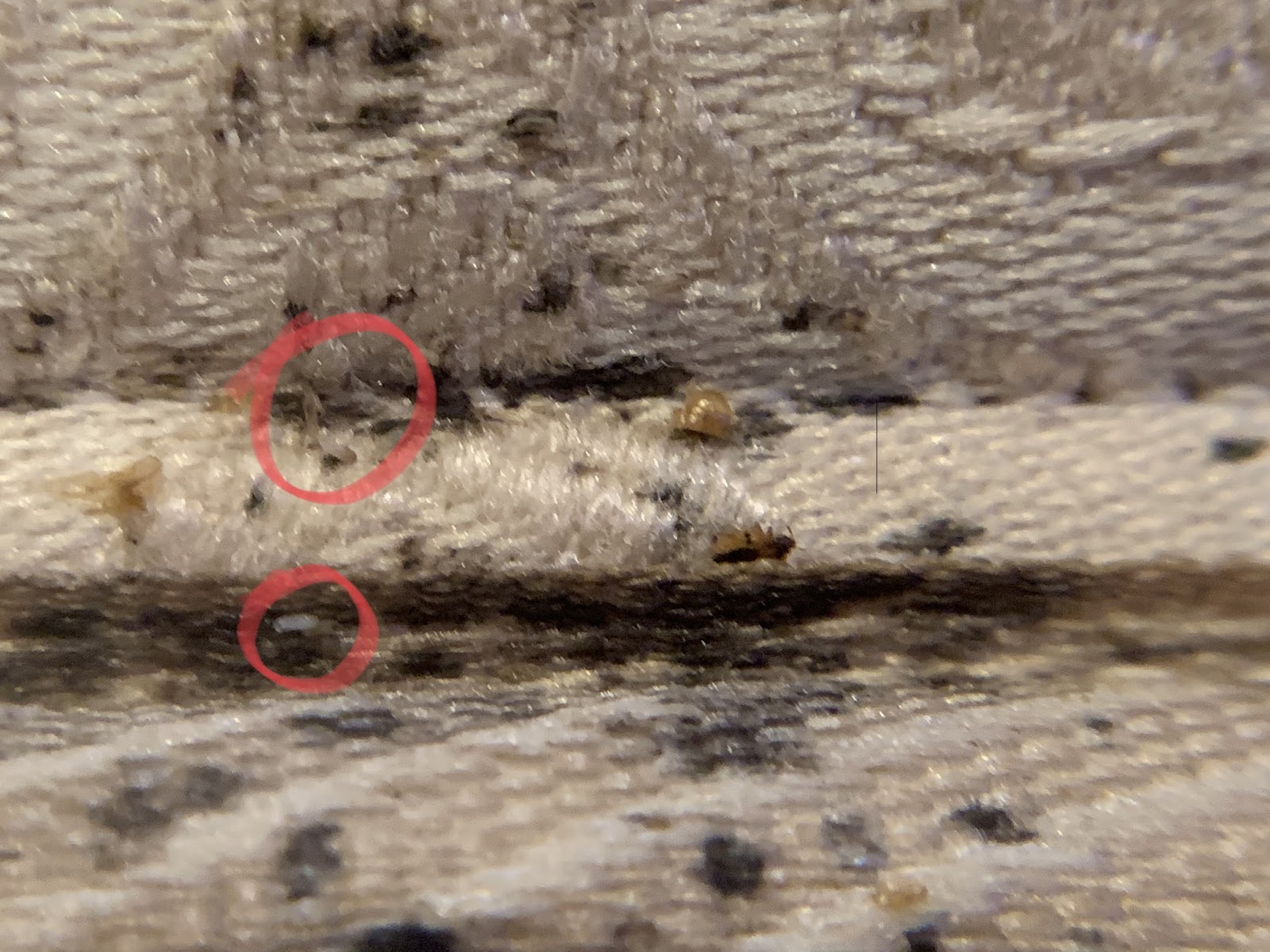 They emerge silently from their protected nests every night to drink human blood. This is a very real nightmare experienced by many homeowners and business owners and their customers alike.

What is even more nightmarish is that they inject you with an anesthetic and an anticoagulant, so you do not even realize you are getting bit!

The first symptom you may experience is itchy red bumps on your torso, arms, or legs—or all over your body. Unfortunately, there are many other bugs that can cause red itchy bumps, such as mosquitoes and fleas, so these symptoms are not always the best indicator of the presence of bed bugs.

To further confuse the issue, each person’s reaction to bed bugs is wildly different and varied. Some may experience mild to no reaction while others can have severe allergic reactions. Since you are sleeping and cannot feel them biting you, hundreds of bites can cover your body in just one night.

They leave sticky dark-black stains on bedding and furniture where they are feeding. The spots are caused by dried blood and excrement from the bed bugs. 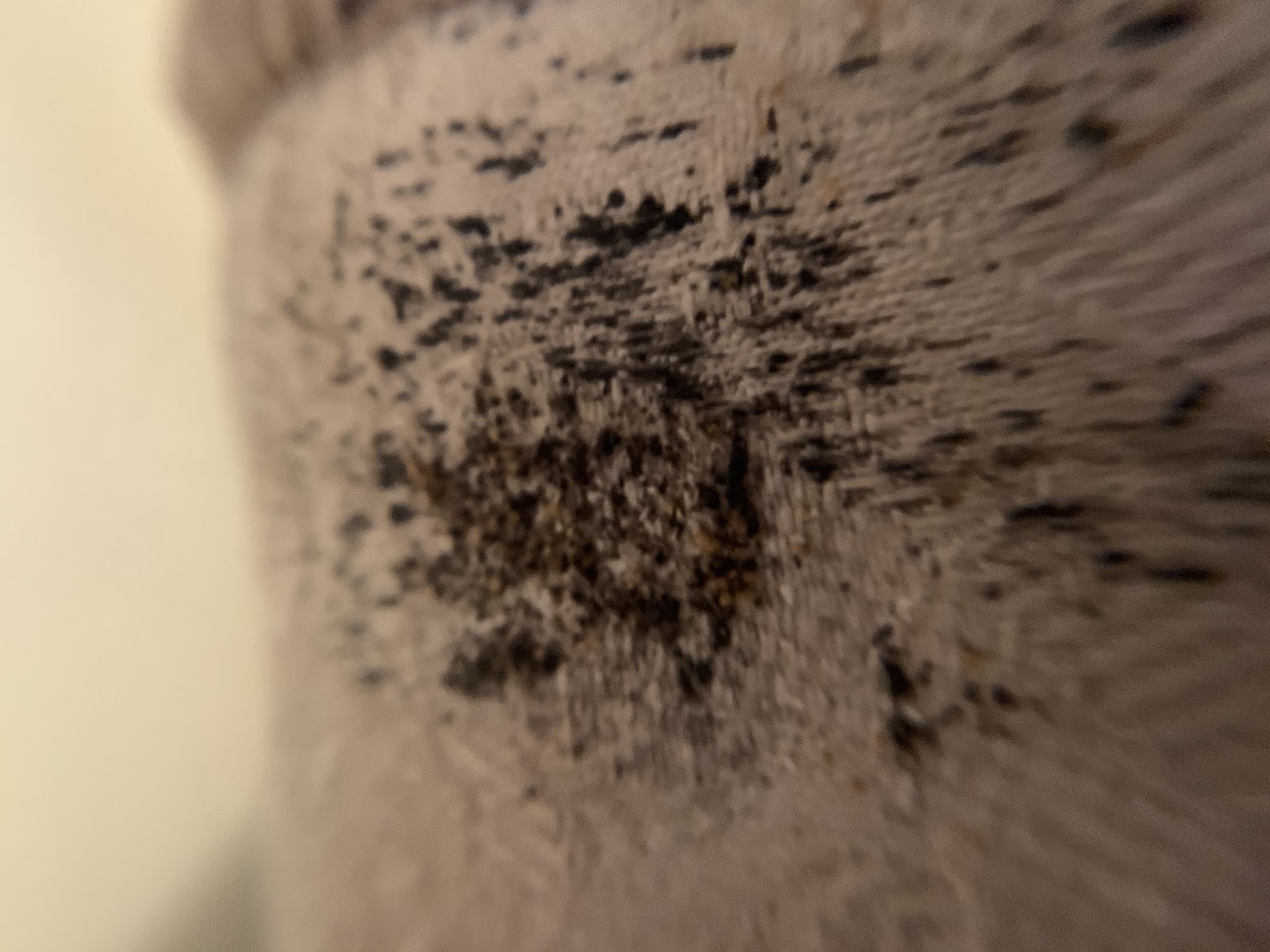 Bed bugs go through several molts as they grow, shedding their old exoskeletons, which can be found anywhere that bedbugs have traveled. They go through what’s called a gradual metamorphosis starting with an egg, progressing to first, second, third, fourth, and fifth stage nymphs and then to adulthood.

Bed bugs can be accidentally introduced into your home in several different ways. For some people, bed bugs have crawled into luggage or clothing after they’ve stayed at a hotel or motel. They return home, and the bed bugs crawl out from hiding and lay eggs in their new surroundings.

Other homeowners have gotten bed bugs from family members or friends that may have stayed overnight.  We see large occurrences of bed bugs after hurricanes have forced people to stay in storm shelters. Often when people are staying with relatives or sleeping in hotels, bed bugs come along for the ride. 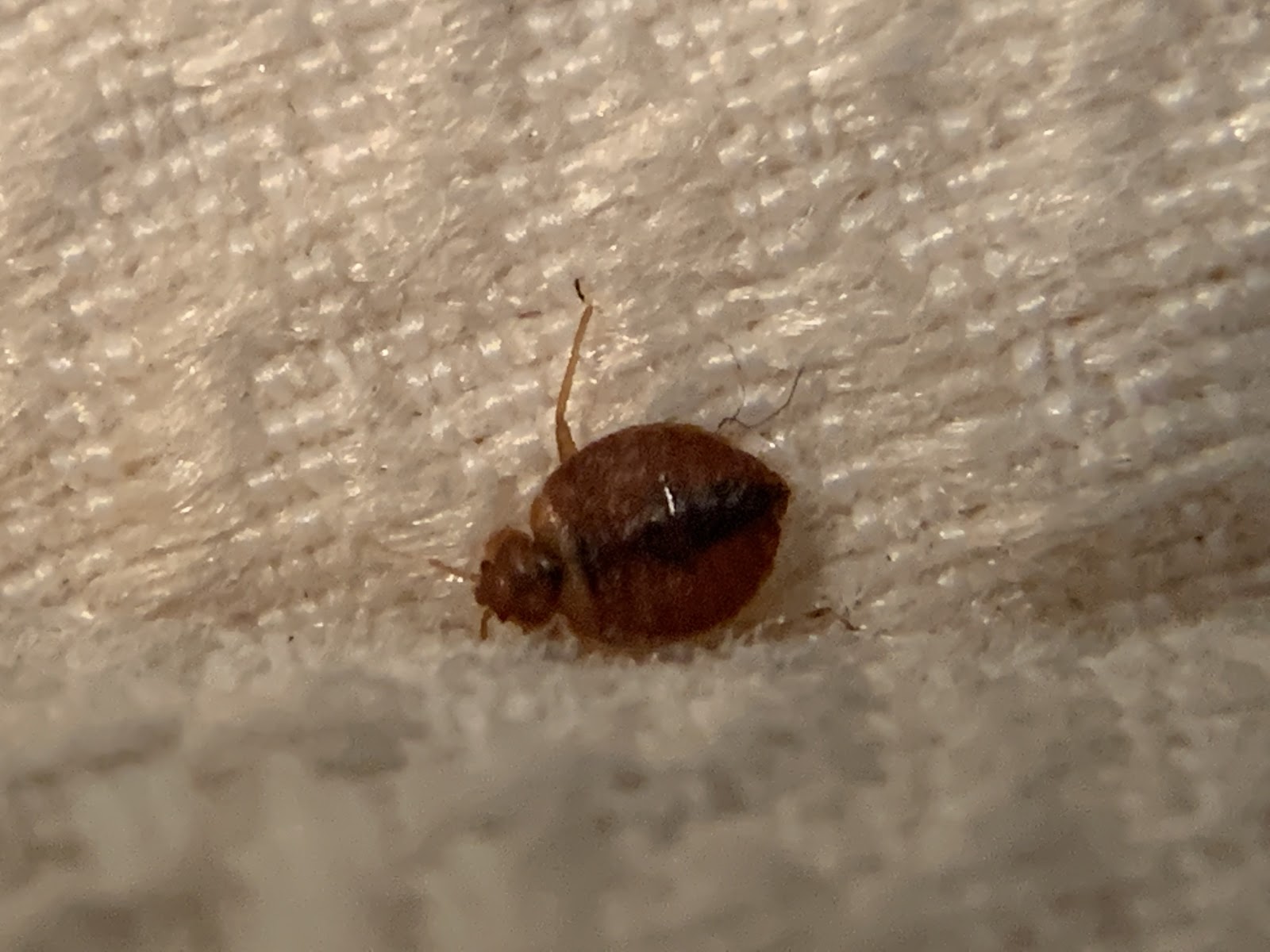 Some homeowners who have used the store bought “bug bombs” may have initially had quick results; however, weeks or months later, they will inevitably see a return of bed bugs.

The reason for this is the eggs that bed bugs lay. Like many other insect eggs, they are protected from chemicals. Penetrating bed bug eggs with a chemical spray is next to impossible. The function of the egg is to protect the embryo inside from exterior pollutants and chemicals.

Once the bed bug hatches out of its egg, it is extremely small and fragile. If it does not come into contact with any residual pesticides, it will continue to feed and grow. Female bed bugs can give birth to anywhere from one to five nymphs a day and 500 in a lifetime. 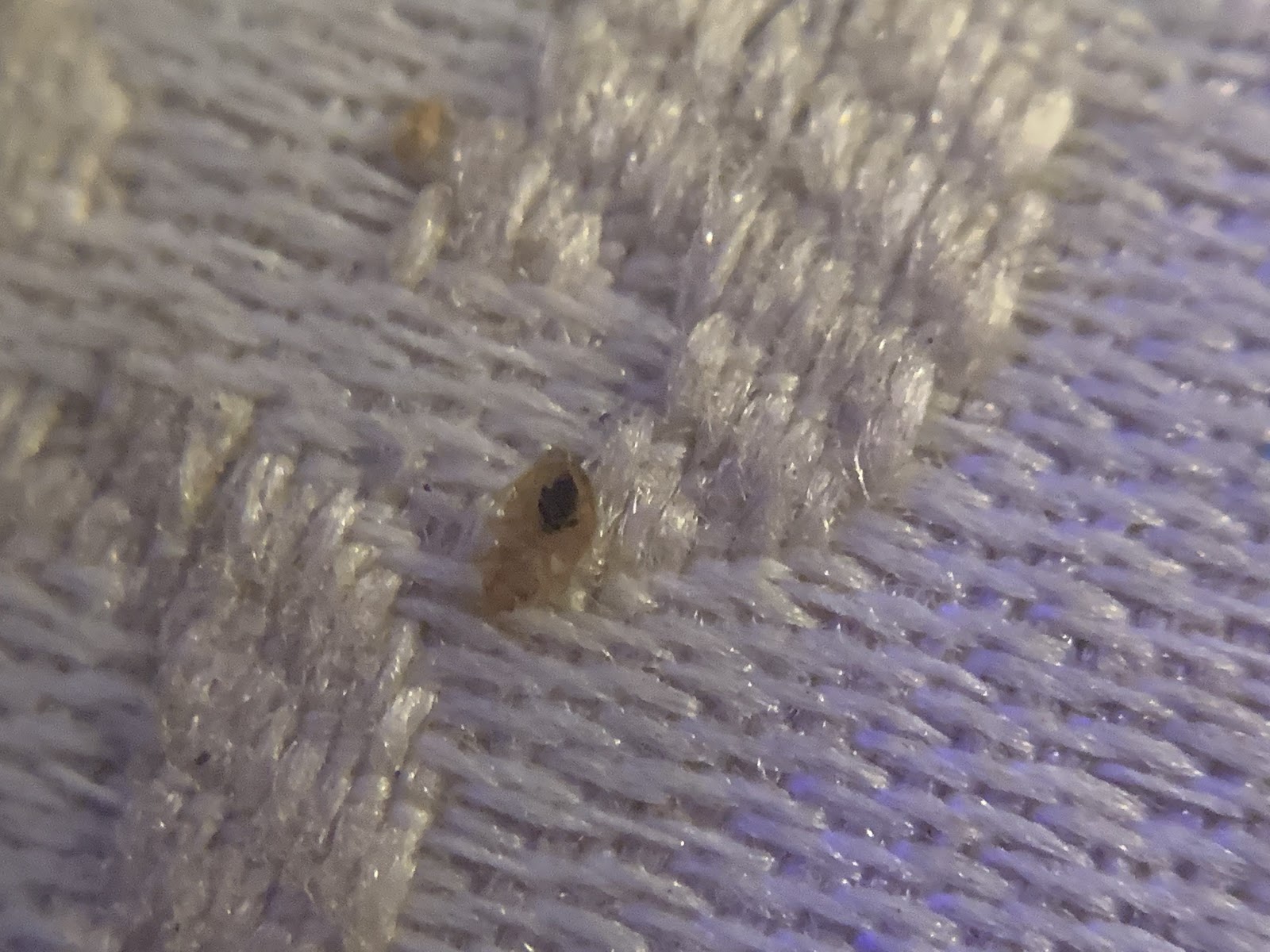 If you suspect your home or business has bed bugs, call a professional company like Dave’s Pest Control. Getting rid of bed bugs can be very difficult, best accomplished by trained technicians.

If you see bugs in your landscape or inside your home, call us today for a free consultation.